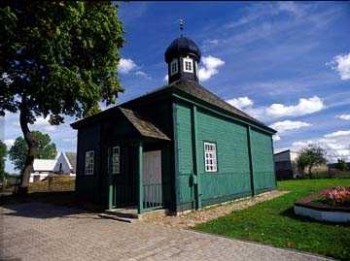 Poland – In a remote rural corner of Catholic Poland, descendants of  Muslim Tatars who settled here centuries ago try to revive a culture eroded by time, assimilation, emigration and communist-era oppression.

Poland’s Tatar community, mainly confined to the northeast borderlands near Lithuania and Belarus, has been celebrating the end of the holy Muslim fasting month of Ramadan in their two wooden mosques, which resemble churches because they were built by Catholic carpenters who had never seen a mosque.

The 5,000-strong community no longer speaks their Turkic Tatar language, they often celebrate Catholic festivals and mixed marriages with non-Muslims are quite common. Many eat pork and drink alcohol, but Islam remains key to their identity.

With growing numbers of tourists visiting their forested region, the Tatar community has applied for a 5.5 million zloty ($1.77 million) subsidy from Warsaw and Brussels to build a cultural and religious center.

“I hope we will get this center and I will be able to dedicate myself fully to my spiritual obligations,” said Janusz Aleksandrowicz, the imam of Poland’s oldest mosque in the tiny village of Kruszyniany.

“The handful of Muslims here cannot support their imam as is the case for Catholic priests, so my day job is working in a bank,” he told Reuters after leading some 80 Muslims in prayers marking the end of Ramadan.

“I want our children to learn Arabic, to read the Koran, to rebuild this lost spiritual quality in the future generations.”

The mosque hosts prayers about 10 times a year. The nearby sister village of Bohoniki also has a mosque.

Saudi Arabia has recently started sponsoring pilgrimages to Mecca for up to 30 local people annually. The mosque has a new sound system and the imam sometimes gives the call to prayer.

Polish Tatars have also built ties with ethnic kin from Russia’s Tatarstan and Bashkiria regions as well as Belarus, Ukraine and Lithuania, organizing a cultural festival and setting up a traditional dance group, among others.

The Tatars are a rare ethnic and religious minority in homogenous, overwhelmingly Roman Catholic modern Poland following the eradication of the country’s large Jewish population and other minorities by the Nazis during World War Two.

The Tatars’ warrior ancestors settled in the Polish-Lithuanian commonwealth from the 14th to the 17th centuries, helping to protect its eastern borders and being rewarded with land.

Their numbers have been whittled down by the many tragedies to hit Poland in the 20th century, including war and decades of communist rule. Poverty and border changes which forced many Polish Tatars to become Soviet citizens also played their roles.

“There is so little left of our culture that we would not have made it until now without Islam,” said Dzenneta Bogdanowicz, who runs a restaurant serving typical Tatar food across the street from the mosque.

“I reach hearts here through the stomach. We don’t only serve food in here, we talk to our guests, tell them who we are, explain that our religion, Islam, brings peace,” she said, her light blue eyes and blond hair a relatively rare sight among the darker, sometimes oriental features that predominate here.

The Tatars are well integrated into Polish life and have good relations with their Catholic neighbors.

“Everyone respects each others customs. It’s obvious that during Christian holidays I will not be working on my farm, disturbing my neighbors,” said Dzemil Gebicki, who is a guide at the 18th century mosque.

The region was often called ‘three-days-off’, said Aleksandrowicz, as citizens would mark in succession the holy days of Muslims, Jews and Christians — Friday, Saturday and Sunday respectively.

“I am an ardent Catholic, but the Tatars are decent people. We also have Orthodox Christians here, you know, and we are all fine with each other, we never had any problems,” said Wladyslawa Arciuch, a resident of the village for 58 years.

With Poland’s accession to the European Union in 2004, strong economic growth and an increase in domestic tourism, some Tatars are now moving back to their ancestral lands.

“Everybody who could escape used to do so several years ago. Now, the trend is reversing, Tatars are coming back. You cannot find a free piece of land here to buy anymore,” said Gebicki.