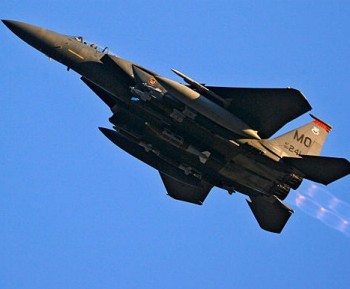 Saudi Arabia is about to buy another $60bn worth of military hardware from the US, and even The Guardian is dutiful in parroting, without question, the accepted western narrative :

The sale, under negotiation since 2007, is aimed mainly at bolstering Saudi defences against Iran, which the US suspects will achieve a nuclear weapons capability within the next few years. The transfer of advanced technology, mainly planes, is to provide Saudi Arabia with air superiority over Iran.

Ignoring the fact that miltary aircraft (which form the bulk of the deal as we know it) are prettty much useless against a nuclear missile, especially one that does not exist, $60bn buys a mind boggling amount of firepower, so that must mean that Saudi Arabia’s military capacity right now is woefully insufficent compared to Iran’s, right?

Saudi military spending already dwarfs Iran’s by a factor of six. Indeed, by head of population, Saudi is the world’s biggest purchaser of military hardware.

Global Firepower has a direct comparison of the two nations’ military strengths, and it turns out that Iran’s military is only superior in terms of manpower numbers.

So if Iran’s intention is to send waves of soldiers marching across the desert, then maybe Saudi has something to fear.

But when it comes to “air-based weapons”, Global Firepower puts the relative numbers (before this deal) at Saudi 453, Iran 84. (Bear in mind also that Iran’s aircraft are widely described as museum pieces by military analysts, because the sanctions mean that Iran has no access to spare parts or modern technology).

And when you consider the reality that Saudi has the full support of all the US military bases in the region, the suggestion that Riyadh has something to fear from Tehran is laughable.

As King Abdullah of Jordan said recently, the Arab world is much more concerned about the Israeli-Palestinian conflict than any Iran issue.

And, as a major survey of the Arab public opinion found recently, the Arab majority not only agrees with King Abdullah but is in fact very sympathetic of Iran’s right to nuclear technology, with a majority saying a nuclear-armed Iran may in fact be a good thing for the region.

Amjad Atalla of New America Foundation has an excellent summary of this whole debate here.

And the American Foreign Policy Project covers many of the myths and nuances of the military and security debates concerning Iran here.

So, if the mainstream media have missed the point, then what is really going on?

Well, with America suffering it’s worst recession in 60 years, the biggest arms contract ever signed would certainly be a welcome boost to earnings in the military industrial sector.

And as I blogged a year ago, Saudi Arabia has always been keen to buy as much favour in Washington as it can, because it’s concerned that any hint of warming relations between DC and Tehran would almost by definition be a threat to Riyadh’s regional hegemony.

Meanwhile, The Guardian highlights one other, richly ironic, aspect to this deal:

“Addressing Israeli concerns, advanced sensors on the new Saudi F-15s will have technology built in to prevent them being used against their Israeli equivalents.

While Israel sees Saudi Arabia as a useful buttress against Iran, there is a fear in Tel Aviv that a rogue Saudi pilot might opt for a suicide mission against Israel. The Israeli air force want to maintain an advantage.”

So Washington will probably be announcing another big arms sale soon, this time to Israel.