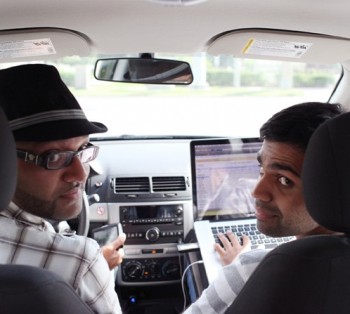 What do a Las Vegas casino manager, a Cambodian refugee, a Hurricane Katrina hero and a champion Georgian girls basketball team all have in common?

This Ramadan, two New Yorkers have been on a mission: To show Americans and the world the different faces of the US heartland.

Stand-up comedian Aman Ali and filmmaker Bassam Tariq drove across the US to visit 30 mosques in 30 states over the 30 days of the holy month of Ramadan, a time of fasting and spiritual purification for Muslims. It is a journey that covered 12,000 miles. And they have been blogging throughout.

Tens of thousands of people from more than 20 countries, including Luxembourg, Panama and Vietnam, have been following the 30 mosques blog.

The road trip comes against the backdrop of a rise in hate crimes against American Muslims and a heated debate over the appropriateness of building an Islamic centre two blocks away from ‘Ground Zero’ that has gripped the country.

But Aman, 25, and Bassam, 23, say their decision to go on the trip had nothing to do with the recent storm over the Islamic centre.

The two also blogged on a road trip they took last Ramadan, when they visited 30 mosques around New York City. It attracted fans across the US and the world, so they decided to up the scale a year later.

“With the mosque near Ground Zero, we believe people on both sides have been exploited – but it’s not the only issue that defines Muslims,” says Aman.

“Post 9/11 has seen all these narratives about racial profiling and airport security – these issues do concern a lot of American Muslims, but they aren’t the only ones.”

So what are the struggles being experienced by Muslims in the US?

Bassam responds: “A father who is trying to provide for his children, or take his kids to soccer practice. These are the common issues Americans [and their Muslim neighbours] face.”

“It’s been so frustrating. It’s time for Muslims to start telling their own stories.”

The plurality of Muslim communities in the US is also something the bloggers hope will educate everyone.

“I hope if there’s one thing that non-Muslims watching this project will draw from is that a lot of what we’re covering is just part of their community,” says Aman.

“I hope they accept that. It’s not just some fringe group but it’s a part of the American fabric.”

And a diverse fabric it is. During their travels, the two broke their fast with some former victims of the Khmer Rouge, met a Pakistani-Mormon couple and were given a tour by a teacher from Oklahoma who often wears cowboy boots underneath her flowing abaya.

But it was their stop at a Las Vegas mosque minutes away from The Strip, the city’s infamous road of casinos and hotels, that has generated the most feedback from readers.

Gambling is prohibited in Islam, but it is somewhat common for Muslims living in Las Vegas to work in casinos, Aman explains. Many have migrated to the US from Bosnia, Afghanistan, Morocco, the Philippines and Somalia.

Amanullah is one such person. A board member of the Jamia Masjid, the Afghan father also works full-time as a casino manager at the MGM Grand Casino in downtown Las Vegas.

Amanullah said he took the casino job in the 1980s because he desperately needed the income to support his family and to send money home to relatives in Afghanistan.

“I had no money,” he told Aman and Bassam. “I used to walk my daughter to school and I would have no money to even buy her milk. I was only making enough to cover rent.”

“In all my years I’ve never gambled or sipped a drop of alcohol,” he said. “I’ve never enjoyed seeing any of this around me and as I get older it becomes more and more difficult to stand this. The only thing that gives me peace is my family and the masjid.”

A few days and some 200 miles later, Aman and Bassam stopped at Masjid Rehma in the state of Louisiana, where they met Abdulrahman Zeitoun, the unassuming Syrian-American who became a national hero after Hurricane Katrina hit New Orleans in 2005, killing 1,800 people.

Zeitoun stayed back and paddled from house to house in a canoe, offering help to his neighbours. He was later arrested as a suspected terrorist and detained for almost a month.

A book relating his experience has now been published and an animated film adaptation is due to be released next year.

“I was really moved by his character when we met him,” Bassam recalls. “We went to his house and met his wife. On the table there was a storyboard of the film they’re making – it looked like a cross between Persepolis and Waltz with Bashir, it was amazing.”

The two bloggers were not embraced warmly everywhere. In a last-minute change of plans, they decided to visit a mosque in Mobile, Alabama, with two CNN journalists tagging along to cover the story.

Unlike the other mosques they had stopped at, this visit was not pre-arranged and soon after arriving, they were asked to leave. No reason was given.

And on the long night journey from Mississippi to New Orleans, the two were stopped and questioned by a Mississippi police officer.

Bassam still sounds stunned when he describes the incident. He said they had always tried to avoid driving at night, partly for fear of being racially profiled but it could not be avoided that night.

They were tailed by the police for 15 minutes before being pulled over, he says. “We thought he was going to give us a speeding ticket.”

But the officer asked to see a driver’s license and then asked them: “So what do you think about that ground zero mosque?”

Bassam says: “I was like ‘what?’ It was completely out of nowhere … but I knew however I answered this question was going to decide how we were going to spend the night.

“So I thought about all the right-wing talking points I’d read [from people opposed to the mosque] and said: ‘Well … for them to build it by Ground Zero is very insensitive. I mean come on, it’s been less than 10 years and we’re still healing from the attack. Isn’t it just a slap in the face?'”

“Yeah!” Bassam said the officer exclaimed. “I mean, that’s just wrong for them to build it there.”

He smiled and let them go.

While the incident left both men stunned, they said it has not shaken their core feeling that Americans have been generally accepting.

“America has its dark ends, but I still feel like it’s the most pluralistic, accepting society in the world. I was born in Pakistan but I love it here,” he says.

Aman, who was born in Ohio, feels the same way. “There’s no doubt that America and Islam are on troubled ground at the moment. It’s not the same place my parents came to.”

“But part of me still feels it’s there,” he adds. “So going on this road trip – it’s one of those journeys to see how broad of a definition of America are people willing to accept?”