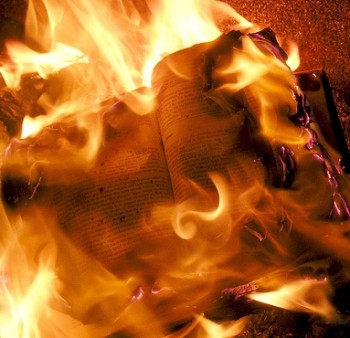 It seems burning of religious texts is not something only confined to crazy fringe Christian leaders wanting to burn Quran’s on Spet 11.

In 2008 Orthodox Jews set fire to hundreds of copies of the New Testament in an act of violence against Christian missionaries in the Holy Land.

At the time Or Yehuda Deputy Mayor Uzi Aharon said missionaries entered a neighborhood in the predominantly religious town of 34,000 in central Israel, distributing hundreds of New Testaments and missionary material.

After receiving complaints, Aharon said, he got into a loudspeaker car and drove through the neighborhood, urging people to turn over the material to Jewish religious students who went door to door to collect it.

“The books were dumped into a pile and set afire in a lot near a synagogue,” he said.

The newspaper Maariv reported at the time that hundreds of yeshiva students took part in the book-burning. But Aharon told The Associated Press that only a few students were present, and that he was not there when the books were torched.

“Not all of the New Testaments that were collected were burned, but hundreds were,” he said.

He said he regretted the burning of the books, but called it a commandment to burn materials that urge Jews to convert.

Calev Myers, an attorney who represents Messianic Jews, or Jews who accept Jesus as their savior, demanded in an interview with Army Radio that all those involved be put on trial. He estimated there were 10,000 Messianic Jews, who are also known as Jews for Jesus, in Israel.

When the incident happened in 2008, Police made no immediate comment and no charges were laid since.

Israeli authorities and Orthodox Jews frown on missionary activity aimed at Jews, though in most cases it is not illegal. Still, the concept of a Jew burning books is abhorrent to many in Israel because of the association with Nazis torching piles of Jewish books during the Holocaust of World War II.

In early 2008, the teenage son of a prominent Christian missionary was seriously wounded when a package bomb delivered to the family’s West Bank home went off in his hands.

In 2007, arsonists burst into a Jerusalem church used by Messianic Jews and set the building on fire, raising suspicions that Jewish extremists were behind the attack. No one claimed responsibility, but the same church was burned down 25 years ago by ultra-Orthodox Jewish extremists.

Depsite all these incidents, there was no media driven world wide outrage from the Christian world.

Whether it is a Bible, Torah, Quran or any other sacred religious text, book burning is wrong and should be condemned.