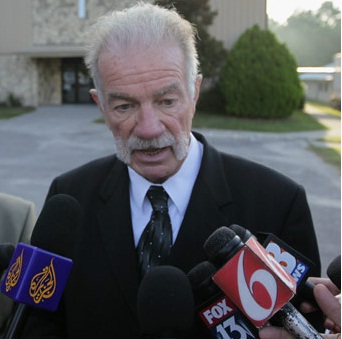 Florida  – An evangelist in contact with the Rev. Terry Jones said the Florida pastor “has agreed in principle” not to burn copies of the Quran on Saturday.

K.A. Paul said that there will be no burning of the book Saturday evening, as had been originally planned.

Earlier Friday, Jones gave mixed messages about whether he intends to carry out his plans, which have sparked international controversy.

Jones told CBS’ “The Early Show” that “we have called the event off.” Soon afterward, however, he told reporters in Florida the burning is still being contemplated.

Challenged by a reporter, Jones then said, “Well, we are hoping that we can come to a conclusion.”

“Are you or aren’t you?” a reporter asked, to which Jones replied, “We’re actually not prepared to answer that right now.”

Jones also said he is scheduled to travel to New York on Friday night for a still unscheduled meeting with the imam in charge of the Islamic center planned near ground zero. The meeting, Jones had said, was part of what convinced him to halt the planned burning.

Jones said the meeting was promised Thursday by local Florida imam Mohammad Musri, who also told him the Islamic center would be moved in exchange for the burning being called off.

Musri said Friday that he made no such promise, and both Musri and the imam in charge of the center, Feisal Abdul Rauf, said there was no agreement on a meeting or relocation of the center.

No deal made to halt Quran burning, Muslim leader says

Asked who is telling the truth about what Musri may or may not have promised, the imam told CNN on Friday, “Of course, I am.”

“I made it very clear to him: I have no control over the project in New York,” Musri said. “I am just a mediator here. I promised to set up the meeting and take him along, pay for it, but no guarantee that I can move that mosque. It’s not my decision.”

Musri said Jones “stretched it and exaggerated” the outcome of their Thursday meeting once he went before the cameras, telling reporters that Musri promised the meeting in New York and that the Islamic center would be moved.

“That’s not what I offered him,” Musri insisted Friday.

Musri said he feels Jones is a “good person at heart” who got himself into a difficult position and could not back down despite calls from Christian and world leaders for him to do so.

“He could not back down, and I felt that it’s my responsibility, as the Muslim leader in central Florida, to go up to him and speak one on one with him and explain that he’s putting American lives in danger and he should reconsider,” Musri said.

But later Friday, Musri said that a meeting may happen next week between Jones and Rauf, the imam in charge of the Islamic center.

Musri, president of the Islamic Society of Central Florida, said it might be difficult for the parties to meet Saturday because of events planned to mark the ninth anniversary of 9/11.

Musri said he envisions a meeting Monday or Tuesday involving Jones, Rauf and himself.

“If we’re successful to do it tomorrow, [that] will be wonderful,” Musri said. If not, he said, they could meet Monday, Tuesday or “as soon as all three parties can find the time to get together.”

In a statement Friday, Rauf said that he was “prepared to consider meeting with anyone who is seriously committed to pursuing peace” but that no such meeting had been set up.

“Our plans for the community center have not changed,” he said. “With the solemn day of September 11 upon us, I encourage everyone to take time for prayer and reflection.”

Earlier Friday, Jones introduced Paul to reporters, saying he and the evangelist were giving Rauf until 3:30 p.m. ET Friday to tell them whether he has plans to move the Islamic center farther away from near ground zero.

Paul didn’t say what would happen if Rauf did not meet the deadline.

“There is a confusion going on; we want to clear that confusion,” Paul said.

Jones’ announced plan to burn Qurans set off a worldwide firestorm of concern, including from U.S. military leaders who said the event — timed to take place on the 9/11 anniversary — would imperil the lives of troops abroad.

Reaction to Quran burning pours in from around world

President Obama said Friday that the idea that “we would burn the sacred texts of someone else’s religion is contrary to what this country stands for.”

He said he hopes Jones “prays on it” and refrains from doing so.

The government has to send a “very clear message” that burning the Quran would endanger U.S. troops and serve as a major recruiting tool for al Qaeda, Obama added.

Asked about the proposed construction of the community center and mosque near ground zero, Obama said Friday that it should be possible to build a mosque anywhere that a church or synagogue could be built.

“I recognize the extraordinary sensitivities” surrounding the issue, Obama said. But “we are not at war against Islam,” he said. The United States is fighting those who have “distorted Islam” and “we’ve got to be clear about that.”

The enemy is a “tiny minority of people” who are “engaged in horrific acts” and have killed more Muslims than anyone else, Obama said. Muslims are other Americans’ neighbors, friends and co-workers, he said. They also are fighting in the U.S. armed forces in Afghanistan, he added. “They are Americans,” he said.

Defense Secretary Robert Gates on Thursday urged Jones to call off the burning. The Vatican made a similar plea, and Interpol issued a worldwide alert that the act could spark violence.

Sporadic demonstrations broke out Friday in Afghanistan, with hundreds gathering to protest the planned burning. The largest demonstration was in the northern province of Badakhshan, where about 500 Afghans protested outside of a NATO base, the International Security Assistance Force said.

The NATO-led force said two people were hurt in the protest. However, the deputy governor of the province said thousands of people turned out, one protester was killed and three wounded.

Asked for his reaction to the Afghan casualties, Jones said it was “absolutely terrible” but said he is not to blame.

“We’re pointing the finger at the wrong person,” Jones said. “I haven’t even done anything. I think it reveals … the violence in Islam. Just the mere mentioning of it, just the threat, causes them to kill people, to protest, to say they are going to kill the president. I think it is quite obvious that what we are saying is definitely, definitely true.”

Earlier this week, the top U.S. military commander in Afghanistan, Gen. David Petraeus, warned that the plan “could cause significant problems” for American troops overseas.

Jones had rejected the pleas. The church had said the event is “neither an act of love nor of hate,” but a warning against what it calls the threats posed by Islam.

Separately Thursday, real estate mogul Donald Trump offered to buy the Lower Manhattan site where the Muslim group plans to build the Islamic center. Trump wrote a letter to Hisham Elzanaty, an investor in the site, offering 25 percent more than the current owners paid for it.

“I am making this offer as a resident of New York and citizen of the United States, not because I think the location is a spectacular one (because it is not), but because it will end a very serious, inflammatory, and highly divisive situation that is destined, in my opinion, to only get worse,” Trump wrote.

Elzanaty said Thursday that he is the majority owner of the two properties slated to become the Islamic center and would consider selling his stake for the right price.

The FBI visited Jones at Dove World Outreach Center in Gainesville on Thursday, according to Jeffrey Westcott, special agent in charge of the Jacksonville, Florida, bureau. The FBI also visited the pastor a few weeks ago, he said, but would not say what was discussed.