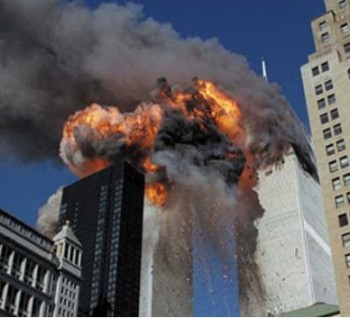 One would think that after nine years at least some of the anger, the horror and shock of the 9/11 terrorist attacks would have dissipated: but no. A glimpse at the headlines, a few days before the somber anniversary, disabuses us of this hopeful notion: a crazed pastor out in the boonies somewhere is burning Korans, and the commander of our forces in Afghanistan feels compelled to respond, as does the President. Theproposal to build a Muslim community center blocks from “ground zero” – modeled on Jewish community centers ubiquitous in New York – is met with furious opposition, and the “anti-Islamization” movement spearheaded by bigots takes off, with mosques all over the country under attack. Physical attacks on Muslims, or people perceived as Muslim, escalate: a New York City cabbie is assaulted by a crazed Islamophobe, and people who have lived in this country for the whole of their lives are afraid.

What’s going on? Andrew Sullivan, writing on his popular blog, writes he is “at a loss to understand why so many have reacted so ferociously to this project.” After all,Imam Feisel Rauf, the Muslim cleric who wants to build Cordoba House, is a moderate who has condemned Islamic extremism: Rauf was sent by the Bush administration overseas to act as an ambassador of good will to Muslim countries. So where is the ferocity coming from?

To find the answer to this question, we just have to follow the money, and thankfully Ken Vogel and Giovanni Russonello over at Politico have done just that. After detailing the money coming into the Cordoba House project from mainstream donors like the Rockefellers, they write:

“There’s also big money behind the mosque opposition, as highlighted by the relationship between [David] Horowitz’s Los Angeles-based nonprofit, Jihad Watch – the website run by Spencer “dedicated to bringing public attention to the role that jihad theology and ideology play in the modern world” – and Joyce Chernick, the wife of a wealthy California tech company founder.

“Though it was not listed on the public tax reports filed by Horowitz’s Freedom Center, Politico has confirmed that the lion’s share of the $920,000 it provided over the past three years to Jihad Watch came from Chernick, whose husband, Aubrey Chernick, has a net worth of $750 million, as a result of his 2004 sale to IBM of a software company he created, and a security consulting firm he now owns.

“A onetime trustee of the …Washington Institute for Near East Policy, Aubrey Chernick led the effort to pull together $3.5 million in venture capital to start Pajamas Media, a conservative blog network …

“The David Horowitz Freedom Center had a budget of $4.5 million last year, according to its tax filings, of which $290,000 came from the conservative Bradley Foundation, which also gave $75,000 to the Center for Security Policy last year. Horowitz has received an average of $461,000 a year in salary and benefits over the past three years, while Spencer has pulled in an average of $140,000, according to the center’s IRS filings.”

Laura Rozen follows up on her Politico blog, detailing the trail of donations from 2008 990 filings for Chernick’s charitable foundation, the Fairbrook Foundation, listing all the familiar suspects – CAMERA, Horowitz, MEMRI, Frank Gaffney’s Center for Security Policy, the Israeli nationalist “Stand With Us” campus project – and a few less familiar, such as the American Friends of Ateret Cohanim, dedicated to thwarting our stated policy of no more settlements where it counts: in East Jerusalem.

Millions pour into the coffers of these groups, all of which are dedicated to one overriding principle, one goal: advancing Israel’s national interests in the US. The serpentine convolutions of the Chernick connection, linking one front group to another, encircle the political and temperamental spectrum, ranging from the Jewish Federation Council of Greater Los Angeles (over $900k) to the many hundreds of thousands given to hardline neoconservative outfits like the Hudson Institute, the Foundation for the Defense of Democracies, not to mention Pajamas Media ($7 million, in collusion with venture capitalist James “extensively experienced in multimillion-dollar technology transfer and license agreements “ Koshland) and a mass campaign to distribute DVDs of the virulently anti-Muslim film “Obsession.”

The aim of all this giving is to create and sustain an obsessive hatred of Muslims, allMuslims, and garner support for Israel. The fulminations of Newt Gingrich and the flaxwn-haired harpies of Fox News, who rail against the “ground zero mosque” seem, on the surface, to make no sense. Are they really saying that they want the US to declare war on the billion-plus Muslims who inhabit the planet earth? This, after all, is precisely what Osama bin Laden has repeatedly said: that all the world’s Muslims must unite under al-Qaeda’s bloody banner because the West, in alliance with Israel, is out to destroy Islam, and it is therefore the duty of the faithful to wage jihad against the US.

The Israelis, having long ago declared war on all the other nations of the region, want us in their camp, and that is precisely what occurred with stunning speed before the smoke cleared from the site where the World Trade Center once stood. “We’re all Israelis now!” exulted Martin “Palestinians are subhuman” Peretz, over at The New Republic. Benjamin Netanyahu, who is today the Prime Minister of Israel, told an audience at Bar Ilan University “We are benefiting from one thing, and that is the attack on the Twin Towers and Pentagon, and the American struggle in Iraq,” according to the Israeli newspaper Ma’ariv. The attack, he averred, “swung American public opinion in our favor” – and now that he and his fellow extremists are in power in Tel Aviv, they are making sure public opinion stays in their favor.

The craziness that ensued in the wake of the 9/11 terrorist attacks had to be sustained if Israel was to take full advantage of the moment – a moment their intelligence operatives anticipated, according to Fox News, in a four-part series by their topnotch journalist Carl Cameron, which started out as follows:

“Since September 11, more than 60 Israelis have been arrested or detained, either under the new patriot anti-terrorism law, or for immigration violations. A handful of active Israeli military were among those detained, according to investigators, who say some of the detainees also failed polygraph questions when asked about alleged surveillance activities against and in the United States.

“There is no indication that the Israelis were involved in the 9-11 attacks, but investigators suspect that they Israelis may have gathered intelligence about the attacks in advance, and not shared it. A highly placed investigator said there are “tie-ins.” But when asked for details, he flatly refused to describe them, saying, ‘evidence linking these Israelis to 9-11 is classified. I cannot tell you about evidence that has been gathered. It’s classified information.’”

Fox News has never retracted a word of this story, although they did – after pressure from the Israel lobby – delete it from their web site. It was never mentioned again, at least in “respectable” quarters, and, to be sure, it was never forgotten, thanks to the Internet, where Carl Cameron will be exposing the Israeli connection to the 9/11 terrorist attacks unto eternity.

Cameron’s noting that “more than sixty” Israelis had been arrested immediately after 9/11, along with and under the same legal rubric as thousands of Arabs, had also been noted here in this space, before the Fox News broadcasts. Why, I asked in a column, was the US government rounding up Israelis, of all people – unless there was some kind of Israeli connection to the attacks? The answer came in Cameron’s reporting, and subsequent stories in the “mainstream” media: the Israelis, whose intelligenceservices had been very active on our soil in the months leading up to 9/11, had beenfollowing the hijackers, shadowing their every move, without telling us – almost as if they were protecting them rather than trying to stop them.

What happened on September 11, 2001, has changed the shape of history, and certainly determined the utterly disastrous course of US foreign policy since that day. We have launched a war of retribution against the entire Muslim world, a vast campaign of bombings, drone attacks, occupation, and terror unleashed on the peoples of the Middle East, from Iraq to Pakistan. This is precisely why the Israelis didn’t tell us what Mohammed Atta and his co-conspirators were up to, although – if we take Fox News seriously, and I realize there are plenty who don’t – there is no doubt that they had it in their power to stop the whole operation before the hijackers had a chance to strike. All they had to do was tell us – and they didn’t. This is the “intelligence failure” – not the lack of centralized information, not the competition between the CIA and the FBI – that made the 9/11 terrorist attacks possible: the perfidy of our Israeli “ally.”

The Israelis didn’t dive-bomb the World Trade Center and the Pentagon with commandeered airliners: Atta and his gang did. Yet they could have prevented it – but why should they have? After all, the attacks have swung public opinion in their favor, as Netanyahu boasted – surely a foreseeable development.

Today, nine years after the event, the Israel lobby is using the anniversary of the attacks to whip up anti-Muslim hysteria to a fever pitch, and they have plenty of bucks to do it. These people – who, as Juan Cole points out, represent a minuscule fraction of the pro-Israel population in the US, and stand out like a couple of sore thumbs from the overwhelmingly liberal Jewish community – mean business, and there’s only one way to fight them. It’s time to play hardball – just like they do.

I was warned, before raising the possibility of an Israeli connection to 9/11, that I was touching a live wire, that my career – such as it is – would be destroyed, and that I would be banished to the hinterlands, where various obsessives trade conspiracy theories and argue over whether it’s the Bilderbergers or the Illuminati who control the world.

It hasn’t happened, but I wouldn’t care if it did. As Ayn Rand once said: I’m not brave enough to be a coward – I see the consequences too clearly. We see the consequences of 9/11 all around us, in the hate-wrinkled face of the Koran-burning preacher, in the shrill shrieking of Pamela Geller whose anti-Muslim rallies in the vanished shadow of the Trade Towers are as ugly as she is: we see it in the faces of Pakistani refugees, huddled in disease-infested camps, as they flee the US invasion of death-dealing drones.

Think about it: the leadership of a nation that betrayed us, that watched, impassively – or, perhaps, gleefully – as Islamist terrorists wreaked deadly havoc on our two biggest cities, has a vast and well-funded propaganda network in this country dedicated to stoking hatred of Muslims. And they are certainly doing a very good job of it.

How do they get away with it?

“In the End, we will remember not the words of our enemies, but the silence of our friends.”