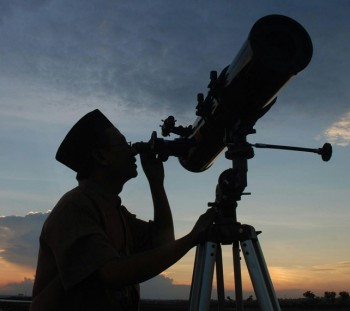 Islamic authorities in different countries often argue over when Eid should fall. The Muslim festival of Eid-ul-Fitr will likely fall on Saturday in India, while Saudi Arabia and other Middle Eastern countries will celebrate Friday.

Eid marks the day Muslims break a fast undertaken during the Islamic lunar month of Ramadan. It is also the first day of the following month of Shawwal.

Most Muslim scholars believe Islamic law stipulates the first day of a lunar month begins with the physical sighting of a new moon crescent at sunset. (Islamic days start at sunset.)

Across the globe, Islamic authorities, aided by telescopes, look to spot a sliver of the new moon in the evening. The geographical location of the observer and cloud cover, among other things, can affect whether the moon is visible.

These factors mean Islamic authorities in different countries often argue over when Eid should fall.

And many Muslims say Ramadan should only last 30 days, which means Eid must fall after that duration whether the moon is viewed or not.

The Saudi Supreme Court ruled on Wednesday that Eid will fall on Friday. The decision was taken after a crescent moon was not visible on Wednesday night but without waiting to do a physical sighting Thursday. Saudi Arabia started Ramadan on August 11, meaning Thursday was the 30th day of fasting.

In India, the Central Moon-Sighting Committee at New Delhi’s Jama Masjid will meet tonight to decide whether the moon is visible.

India began its fasting a day later than Saudi Arabia this year and expectations are that Eid in most of the country will fall on Saturday.

“We’re strict to the old ruling it must be physical,” said Zafarul Islam Khan, editor of Milli Gazette, an New Delhi-based Islamic newspaper. But Mr. Khan said Muslims in Kerala have typically followed Saudi Arabia and will likely start Eid on Friday.

In Indonesia, too, the nation’s two largest Muslim groups often disagree on Eid. The Muhammadiyah often side with Saudi Arabia while Nahdlatul Ulama wait for a physical viewing of the moon.

Some Muslim scholars argue Islam should move to using more precise astronomical calculations to pinpoint the start of Eid, which is giving a boost to Saudi Arabia.

This, they say, would remove uncertainty and allow the world’s 1.2 billion Muslims to celebrate Eid on the same day, together.

The Fiqh Council of North America, a grouping of Muslim scholars, began offering an astronomically-derived date for Eid five years ago.

The council believes the Quran does not mandate physical sightings. It says Eid this year falls on Friday, backing Saudi Arabia’s decision.

Science can predict accurately when a new moon rises. A lunar month literally begins at the moment of “conjunction,” an astronomical term used to describe when the earth, moon and sun lie in the same plane. This year, conjunction occurred on Wednesday but was not visible in most of the world on the evening of that day.

To add to the confusion, a handful of Muslim groups say Eid started Thursday. The Dublin-based European Council for Fatwa and Research says the new moon was visible on Wednesday from some South American countries, meaning Eid should have been celebrated all over the world Thursday. Few Muslims subscribe to that view, although a few Shiite Muslims scholars concurred.

Meanwhile, new technology has made it easier to capture an image of the new moon moments after it appears. A scientist in France captured this image in April using a video camera.

But it remains unclear whether this technology could one day be used to determine the start of Eid, with some scholars still insisting a sighting with the naked eye is what counts, even though telescopes are widely used.