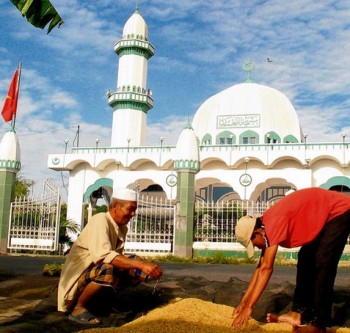 HO CHI MINH CITY — The call to prayer from the minaret reaches out over tightly-packed alleys in a Ho Chi Minh City neighbourhood as men in white knitted skullcaps and colourful sarongs walk to their local mosque.

The scene is more reminiscent of Malaysia, Indonesia or Brunei — not Vietnam and its Chinese-influenced culture where Muslims are a tiny fraction of the population.

This small community in an area known as District 8 says it is the largest enclave of Cham Muslims in the metropolis informally still known as Saigon.

It has more than 1,300 residents, halal restaurants, a large mosque and a madrassa that regularly sends students to Malaysia for further study.

These and other Cham communities in southern and central Vietnam are all that remain of the Champa kingdom that ruled for centuries.

There are more than 100,000 Chams in the Buddhist-dominated country of 86 million, the government says.

“The Cham fell and lost their country. I feel like I live in another country and it’s not my home,” says a noodle-seller who gave her name only as Hachot, 49.

The Cham were a Hindu people who ruled parts of south and central Vietnam for hundreds of years and gradually converted to Islam.

But by the late 15th century the Vietnamese had pushed south and Champa was in decline.

Today, the kingdom’s most visible legacy is the My Son temple ruin near Danang city. It is a UNESCO world heritage site and popular with tourists.

These days more than 80 percent of Cham are adherents of Islam, researchers say.

According to government data, Muslims are the smallest of six major religious groups in the country, with Buddhism the largest.

Religious activity remains under state control in communist Vietnam but worship among a variety of faiths is flourishing. However, Catholics have had a long-running dispute with the government over land, and some minority Buddhist groups have complained of persecution.

The Muslims have kept a lower profile.

“We just follow this religion. We don’t care about politics,” says Haji Mou-sa, 52, deputy manager of the local madrassa. He is fluent in Malay and knows some Arabic.

Mou-sa says Ho Chi Minh City has more than a dozen imams, all trained in Vietnam. Foreign imams also visit, especially from Malaysia, and the Koran has been translated into Vietnamese.

A slight man in a collarless shirt, sarong, and metal-rimmed glasses, he has lived in District 8 since the 1960s, when Chams first began moving to the area.

Many came from the Mekong Delta province of An Giang, where Chau Doc city is still home to a significant Cham Muslim population.

In the beginning, the District 8 Cham homes were made from wood and thatch. Electricity came to the area in 1990, and much later a bridge was built connecting the once-isolated area to downtown, leading to improved roads and rapid development of the surrounding area.

According to residents, there are 16 mosques in Ho Chi Minh City, some of them built with assistance from Muslim nations.

A plaque in the Cham neighbourhood’s Masjid Jamiul Anwar says it was rebuilt in 2006 with funds from the United Arab Emirates and the Red Crescent.

Although they get support from the Middle East, Cham relations remain strongest with Malaysia and Indonesia, thanks partly to shared cultural and religious values.

She says she does not feel a part of wider Vietnamese society, even though the government helped to rebuild her house some years ago.

Attitudes of the majority Kinh ethnic group towards the Cham vary, Hachot says.

“Some Kinh say the Cham are dirty,” she says, and they object to the Muslims’ shunning of pork. “Other people don’t care.”

Many older Muslim residents make pilgrimages to Mecca, and most Cham have Arabic names on their government-issued identity cards.

Mohamath Zukry, 22, moved from his small town in An Giang more than 18 months ago to study and live at the madrassa. He plans to go to Malaysia to finish his religious education, and to study information technology.

Less devout Mack Aly, 29, a real estate agent who lives outside the Cham neighbourhood, says he still enjoys an alcoholic drink with his friends, and dates a non-Muslim woman.

“In Vietnam religion is not so strong. I won’t eat pork. But I don’t pray five times a day. And I drink and smoke,” he explains at an upscale coffee shop.

Aly and his family have taken advantage of the opportunities offered by the Muslim diaspora. His brother works in Egypt and his sister in Indonesia.

Headscarves, long skirts and sleeves are common in Cham neighbourhoods but women leave their heads uncovered when they go to work, and may opt for jeans. They say this is partly out of a fear of discrimination by co-workers.

Ngo Van Dong, 50, is among a small number of Kinh who have converted, despite initial opposition from his family who thought the religion “weird.” The mechanic says he adopted Islam more out of love for his Cham wife than religious piety. Over time, he came to understand his adopted faith better.

Like their fellow Muslims around the world, the Cham in District 8 are marking the holy fasting month of Ramadan until about September 9.

They commonly also enjoy Vietnam’s biggest celebration, the Tet Lunar New Year in February, although they do not engage in the spiritual rituals that accompany it.

“But we still have fun,” says Dong.