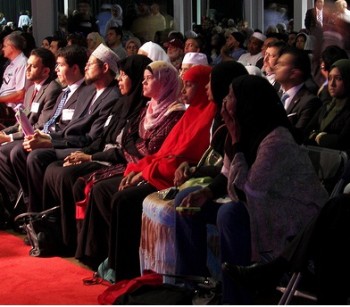 As expression of anti-Muslim sentiment has risen across the United States in recent weeks, Muslim leaders say they are stepping up efforts to unify their communities and push for greater public and political engagement.

While some U.S. Muslim groups tried after Sept. 11, 2001, to promote greater dialogue between Muslims and non-Muslims, recent events make it clear that not enough has been done, said Salam Al-Marayati, president of the Muslim Public Affairs Council (MPAC), who spoke Monday at an interfaith news conference at Western Presbyterian Church in the District.

“Definitely there is the need for an American Muslim narrative,” Al-Marayati said, adding that U.S. Muslims need to become more savvy technically and politically. “The story of what mainstream American Muslims stand for has not been told effectively. We as Muslim Americans need to do a lot of changing and soul-searching.”

The interfaith event was among a surge of responses to hostility sparked by a proposed Islamic center near Ground Zero in Manhattan. Protesters have targeted mosques under construction elsewhere in the country; a Florida church announced that it will burn Korans on Sept. 11; and a Muslim taxi driver was stabbed in New York.

On Tuesday, the Congressional Muslim Staff Association will hold a panel on Capitol Hill titled “Muslims in America: Myths and Realities: A discussion on faith in the Wake of the Park 51 Controversy,” and on Monday, a grass-roots organization called My Faith My Voice unveiled a public service announcement showcasing diverse Muslims discussing their religion.

Although Muslims have made some inroads into mainstream American politics and media in recent years, the pace has not been rapid enough, community leaders say, noting that the diversity of sects, native languages and ethnicities has made it harder for a unified voice to emerge.

The community in the United States is also relatively new, said Naeem Baig, executive director of the Islamic Circle of North America (ICNA) Council for Social Justice, who also spoke at the interfaith event.

“For Muslim organizations, it’s still a learning process,” he said in an interview, adding that while past efforts to consolidate a message failed to gain traction, the current crisis has reminded Muslim groups of the necessity of renewing that push. Several groups, including the Islamic Society of North America (ISNA), the Council on American-Islamic Relations (CAIR), ICNA and MPAC, are working on forming a National Muslim Leadership Alliance, Baig said.

“What’s pushing us now to jointly work together, to come up with some strategy, is it is not affecting just one Muslim organization, it is affecting Muslims,” he said. “There’s a real serious threat of violence against individuals.”

Asma Hanif, chair of the Council of Muslim Organizations in the Washington area and one of the interfaith speakers, said community leaders may not have realized the lasting damage of the Sept. 11 attacks to Muslims’ image.

“We didn’t think it was going to have this kind of continuing effect, go on and on and on,” she said.

In addition, mainstream Muslims must combat the negative publicity created by those who commit terrorist acts in the name of Islam, Al-Marayati said.

“Our message isn’t as sensational as the extremists’ message,” he said, adding that better organization would help disseminate mainstream views.

“We’ve had scholars issue a fatwa against terrorism; we’ve had national grass-roots campaigns to fight terrorism. The substance is there, but not the reach, though it is improving.”