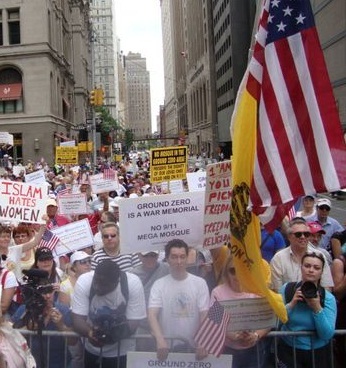 Anti-Muslim sentiment seems to have gone mainstream. Fringe groups like Stop Islamization of America, which is behind many of the protests in lower Manhattan, are suddenly receiving attention from media outlets.

You may have heard the ad put out by the National Republican Trust Political Action Committee: “On Sept. 11, they declared war against us. And to celebrate that murder of 3,000 Americans, they want to build a monstrous 13-story mosque at ground zero.”

Did you catch that? They attacked us on 9/11, and now they want to build a mosque at ground zero.

This is what has become of the debate over the construction of an Islamic community center in Lower Manhattan. You know, the so-called mosque at ground zero that’s neither a mosque nor at ground zero.

No matter what your feelings are about the proposed community center, there can be little doubt that Islamophobia is on the rise in America.

A Washington Post poll released last year found that nearly half of Americans — 48 percent — have an unfavorable view of Islam. That’s nine points higher than in the months after the Sept. 11 attacks. A new national survey by the Pew Research Center found that 30 percent of those who disapprove of President Obama’s job performance believe he is Muslim.

What’s more disturbing is that anti-Muslim sentiment seems to have gone mainstream, with fringe groups like Stop Islamization of America — which is behind many of the protests in lower Manhattan and has been participating in similar anti-Muslim rallies across the country — suddenly receiving regular air time on mainstream media outlets.

Stop Islamization of America is actually an affiliate of a European organization called Stop Islamization of Europe, an anti-Muslim hate group whose motto is “Racism is the lowest form of human stupidity, but Islamophobia is the height of common sense.”

The connection between the two organizations is telling.

In Europe, the passage of laws curtailing the rights and freedoms of Muslims and the success of avowedly anti-Islam political parties have led to a sense of marginalization and disenfranchisement among Europe’s Muslim communities. That in turn has led to what I believe is a sharp increase in radicalization among Europe’s young Muslims.

For years, scholars like myself who’ve studied these radicalization trends have confidently argued that the kind of institutionalized Islamophobia one sees in large parts of Europe could never take hold in the U.S. That America’s unbreakable dedication to religious liberties would never allow anti-Muslim sentiment to become mainstream. That, in fact, America’s Muslim community — educated, prosperous, moderate and integrated into every level of American society — may be our nation’s greatest weapon in fighting the ideology of radical extremism.

It seems we were wrong. The same kind of Islamophobia that has made much of Europe inhospitable to its Muslim citizens is now threatening to seize the U.S.

The fear is that this may lead to the same kind of radicalization among Muslim youth in the U.S. that we’ve seen in Europe. It has already played into the hands of al-Qaida, which has for years been trying to convince American Muslims that the unfettered religious freedoms they enjoy is a mirage — that the U.S. will eventually turn against its Muslim citizens.

Are we in danger of proving al-Qaida right?

I am a liberal, progressive, secularized American Muslim. But when I see that bigotry against my faith — my very identity — has become so commonplace in America that it is shaping into a wedge issue for the midterm elections, I can barely control my anger.

I can’t imagine how the next generation of American Muslim youth will react to such provocations. I pray that we never find out.