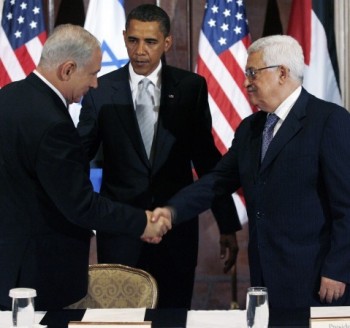 Israel and the Palestinians are to resume direct peace talks next month under pressure from Washington to break years of political stalemate.

The US secretary of state, Hillary Clinton, is expected to announce the first direct negotiations since 2008 later today. The Israeli prime minister, Binyamin Netanyahu, and the Palestinian president, Mahmoud Abbas, will fly to Washington early next month for an initial meeting.

The Americans say the process will have a one-year deadline to resolve core issues that eluded agreement in the nearly two decades of on-off talks since the 1993 Oslo peace accords. These include the borders of a Palestinian state, the division of Jerusalem, Israeli demands for a demilitarised Palestine, and the right of return for refugees.

The 2 September date for negotiations has been set only after the Obama administration strong-armed Abbas into agreeing to talks that the Palestinian leadership fears are not likely to deliver results because Netanyahu is not a serious partner for peace. The Palestinians point to the continued expansion of Jewish settlements in the West Bank as evidence that the Israeli prime minister is paying lip service to ending the occupation.

Abbas has sought guarantees from the US that the Palestinians will not be drawn into perpetual negotiations that go nowhere while Israel continues to expand into the occupied territories. The Obama administration offered the one-year deadline for talks to be completed as a reassurance to the Palestinians, but Abbas and his colleagues remain sceptical that the negotiations will achieve anything. The Palestinians are also doubtful that the White House has the political will to pressure Israel, after Obama backed down in a confrontation with Netanyahu over settlement building.

Netanyahu has said Israel will talk only without preconditions. He has so far declined to extend a partial freeze on settlement construction in the West Bank due to expire next month.

Clinton spoke to the Jordanians, to the other members of the quartet of Middle East peacemakers – the United Nations, the European Union and Russia – and to Tony Blair, the quartet’s special envoy, in recent days to ensure that an agreement to begin the talks was in place.

An Israeli official said today: “We are waiting to see the formulation of the American invitation draft. Our position remains that we don’t want preconditions.” A Palestinian official said: “If the statement meets what we are calling for, we will say yes, of course.”

Abbas, whose Fatah party rules the West Bank, broke off talks with the previous Israeli prime minister, Ehud Olmert, in 2008. Contacts were frozen after Israel’s offensive in the Gaza Strip in that same year against the Islamist group Hamas.

Contacts resumed in May this year after a hiatus of 19 months, in the form of “proximity talks” through Obama’s Middle East envoy, George Mitchell, who has been working for weeks to get Abbas to agree to upgrade the process by resuming direct negotiation.

Hamas, which controls Gaza and refuses to renounce violence against Israel, said the proposed peace talks would do nothing to help the Palestinian cause. “There is no use at all in resuming the negotiations,” said the Hamas Palestinian prime minister in Gaza, Ismail Haniyeh, after Friday prayers.

Launching the talks early in September is seen as crucial. Israel’s 10-month moratorium on Jewish settlement building in the occupied West Bank is due to end on 26 September. A full-scale return to settlement construction could fatally undermine the talks.

Salam Fayyad, the Palestinian prime minister in the West Bank, has warned the Israelis not to offer Abbas “some Mickey Mouse state”.