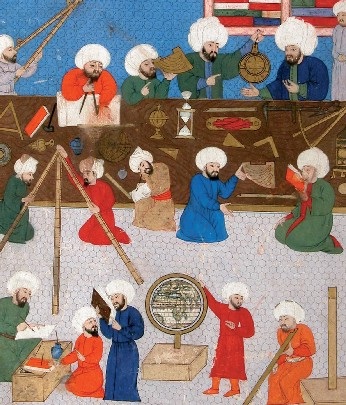 ISTANBUL – An exhibition titled ‘1001 Inventions,’ featuring scientific and technological developments from the golden age of Islamic civilization, opens with the participation of Turkey’s prime minister. The exhibit displays many items that shed light on the history of science, enabling visitors to make a virtual journey into the past

Providing a look at the golden age of Islam’s heritage, a new exhibition titled “1001 Inventions” is hoping to update global school curriculums to include the contributions of Muslim inventors in math, geography and physics.

“Every civilization reached a level by adding to the scientific and technological developments left by the previous civilization,” Professor Dr. Salim al-Hassani, head of global nonprofit educational institution Foundation for Science, Technology and Civilization, or FSTC, told the Hürriyet Daily News & Economic Review.

Unfortunately, he said, Europeans did not acknowledge the debt they owed great Muslim scholars in advancing science.

“The exhibition has made a big contribution to removing prejudices of Western people against Islam. We organized this exhibition with an attempt to provide cultural balance,” said al-Hassani, noting that the exhibition would be repeated in 30 important cities on five continents over the next four years.

The interactive exhibition is currently displayed in Istanbul’s Sultanahmet Square but it already drew 500,000 people to the London Science Museum when it was organized there by the FSTC.

“The idea to create such an exhibition emerged when Professor Donald Cardwell, the chairman of the Science and Technology History Department in University of Manchester, told me to make research on the lost thousand years of science in Europe known as the Dark Ages,” al-Hassani said.

The results showed that while there was little creative output in Europe, there was a wealth of scientific endeavor in the Muslim world, al-Hassani said.

“In order to explain this to people, we thought that we should find a new technique of communication instead of making a museum,” said al-Hassani emphasizing that this exhibition is entertaining and educating as it utilizes interactive techniques and modern technology. “We demand the inclusion of Muslim inventors into school curriculums so that future generations can be inspired.”

The exhibition is not just restricted to men, as there were also famous females, such as astrologer Meryem Usturlabi.

Al-Hassani said that after civilizations such as the Hittites and Rome, the Muslim world made some of the biggest contribution to the world heritage.

The next destination of the exhibition, which can be seen until Oct. 5 free of charge in Istanbul, is New York.

“We hope that many tourists here in [Sultanahmet] will see and enjoy the exhibiton,” said al-Hassani, adding that they would have a chance to share the cultural accumulation with both local and foreign tourists given that the exhibition has been translated into Turkish and English.

Emphasizing that the project did not serve any religious or political faith, al-Hassani said it was a model showing how people of different faiths such as Christians, Jews, Muslims or Hindus could meet on a common platform.

A Turkish classmate of al-Hassani from Manchester University, Professor Dr. Talip Alp, said that Muslim scientists were not visible today because large sums of money were not being allocated to research and development.

“The successful inventions of the Western countries is not a coincidence today given that their companies allocate a budget for research that is equal to the budget of some countries’ governments in the Middle East,” he said.

Prime Minister Recep Tayyip Erdoğan, who inaugurated the exhibition, said he had especially requested that the exhibition be opened during the holy month of Ramadan.

The thousand years between the seventh and 17th centuries had long been ignored, Erdoğan said.

“Even though Islamic civilization respected previous Assyrian, Babel, Chinese, Greek, Indian, Persian and Roman civilizations, it did not see the same attitude from Europeans,” he said. “But later on, some Western scientists made an effort to praise the contributions of Islamic civilization to the history of science.”

He said he appreciated the efforts of Professor Fuat Sezgin, who wrote the book “Science and Technique in Islam,” describing the book a treasure.

“Also, the History of Islam, Science and Technology Museum, which was opened in Gülhane Park with the initiative of Sezgin, is significant,” the prime minister said.

“It is our responsibility to keep the scientists of Islamic civilization alive. This exhibition will travel the world and it should be a model for similar works. New museums on Islamic science should be opened in our big cities. I believe that such efforts will boost the self-confidence of young Muslim people. Being interested in science and technique has nothing to do with positivism, on the contrary it is a necessity of our own understanding of civilization,” Erdoğan said.