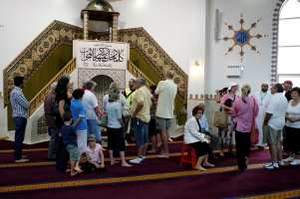 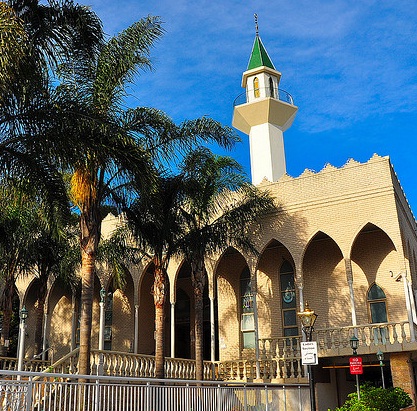 Towering white minarets shine against the backdrop of a midnight-blue sky, contrasting with the green dome that peers proudly down at the passers-by, of which there are many.

As the footpaths of Wangee Rd fill up with worshippers rushing to offer their night prayers, the coloured lights strung about the mosque glow in celebration of the month of Ramadan.

Rarely does Lakemba Mosque have reason to complain of emptiness, but its overflowing patronage in this particular month of the year illustrates just how iconic a place this is to the Muslim community in Sydney.

Founder of the Lebanese Muslim Association (LMA), the organisation that runs Lakemba Mosque, Adib Marabaani recalls a time when the Mosque was a mere two-bedroom house used to gather the scattered Muslim community in prayer.

The Lakemba Mosque of today is a far cry from those days, and Mr Marabaani sees it evolving even more by 2020.

“It will be like a small ministry,” Mr Marabaani predicts confidently.

“There will be a lot of activity from our youngsters who are becoming more professional, with lots of them in university studying to be doctors, accountants, chemists and solicitors,” he says.

Sheikh Haisam Farache is one of those professional “youngsters” mentioned by Mr Marabaani. A solicitor running his own law firm, he also happens to be one of the Imams of Lakemba Mosque.

The young Sheikh envisions the Mosque becoming more contemporary in its services and opening up to cater for more than just the Lebanese community it was originally based around.

“There’s been a shift from predominantly Lebanese to different nationalities in Lakemba Mosque, such as South-East Asian,” says Sheikh Farache.

This demographical change leads to the question of whether the Mosque is moving with the times and altering the nature of its services.

“I think it is happening,” affirms Sheikh Farache. “The services probably now cater more for Australian youth- in accordance with the patronage of the people in the Mosque”.

He predicts that if their current frequenting of the Mosque continues, it can only increase in the future.

“There is going to be a build up [at the Mosque], especially with the youth centre opening up. Lakemba Mosque will be catering for the youth and the needs of the community in a more Australian manner,” Sheikh Farache says.

“There will be greater servicing of youth, particularly those below 12 years of age, as well as the sisters, and much more of the services will be in English.”

“The iconic status of the Mosque will increase with the greater amount of services it offers,” the Sheikh concludes.

In that case, where does Sheikh Haisam Farache see Lakemba Mosque in 2020?

“Inshallah by that time we’ll have advanced social services in the form of counselling, nursing, hostels and a drug rehab centre,” he lists.

“I hope they have a legal service in their Shariah centre, with mediation and conciliation available for married couples’ and neighbours’ disputes”.

“Our services and procedures in the social roles of the Mosque will by then be more formalised and procedural, with the best practices and policies set in place by specialised people,” he speculates.

“The process involved will need to be documented and presented to the larger Australian community to show how Islam solves these social disputes and problems with great success”.

“I wish for us to have a tertiary institution of high learning where people can get degrees that would be recognised. There should also be a hospital as part of our services”.

“We need to be a bit more commercial, rather than an entity relying on grants and donations,” he emphasises regarding the funding of Lakemba Mosque.  “We need to offer charity and social welfare services similar to St Vincent de Paul’s.”

But his vision is not all on charity and academia- the youth who are the future of Lakemba Mosque play a big part in his dream.

“The [Mosque’s] youth centre will be a central point for the youth to connect with their religion. There will be sporting activities and organised camping programs and retreats for troubled youth,” the Sheikh predicts.

And with the many controversies Lakemba Mosque has faced in recent times, the media is not forgotten in Sheikh Haisam Farache’s peek into the future.

“We need to be proactive rather than reactive when it comes to the media. We should engage the media ourselves and inform them of our activities and show them how successful they are,” he stresses.

“There needs to be a forum made where we [Muslims] present a united front, and professionals in the field deal accordingly with the press and publicity,” Sheikh Farache concludes.

Will any of these hopes and dreams be fulfilled by 2020?

“I think there will be a lot of activity around Wangee Rd in the near future,” is Mr Marabaani’s concluding prediction.

And as the night comes to a close and the masses of worshippers trickle out of the Mosque filling the pathways yet again, it seems that despite the many challenges it will no doubt face, Lakemba Mosque may just be on its way to realising these dreams.