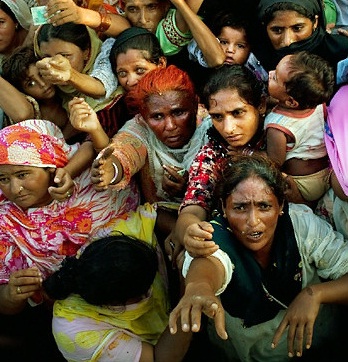 One week after launching a fundraising effort to help victims of Pakistan’s devastating floods, a coalition of Canadian charities has raised just $200,000 for the region. A week after they began a similar campaign following January’s Haitian earthquake, more than $3.5-million had been raised.

“It’s really low compared to the needs,” said Nick Moyer, co-ordinator of a humanitarian coalition comprised of Care Canada, Save the Children, Oxfam Canada and Oxfam-Quebec. “After Haiti, everyone mobilized, there was no question. When there are questions hanging in the air, it makes it harder to fundraise.”

The big question is why international funds have been so slow to come for the ongoing crisis in Pakistan, which has left at least 1,600 dead, displaced millions and threatened the volatile country’s economic stability. Flood victims in Pakistan blocked a highway Monday to angrily demand help from their government and the international community.

UN Secretary-General Ban Ki-moon visited the flood-ravaged region over the weekend and made an impassioned appealed for donations, calling the disaster the worst he’d ever seen.

“Waves of flood must be met with waves of support from the world,” he said. “I’m here to urge the world to step up assistance.”

Unlike the Haitian earthquake or the Asian tsunami of 2004, when a single catastrophic event caused widespread death and damage, the situation in Pakistan has been steadily deteriorating since the flooding began last month.

Aid groups say that floods do not spark the same level of donations as other disasters, even though their impact can be severe and long-lasting.

But Elizabeth Byrs, spokeswoman for the UN Office for the Co-ordination of Humanitarian Affairs, said it is not just the type of natural disaster that has stifled people’s generosity.

“We note often an image deficit with regards to Pakistan among Western public opinion,” she told reporters.

Naseer Warraich, of the Association of Pakistani Canadians, said his organization has so far been able to raise only $30,000 toward it’s $1-million fundraising goal, and that he is still trying to figure out why.

“Nobody was expecting such big damage. But, from what I’m seeing, the response is slow compared to Haiti and other disasters,” he said.

He believes the media is partly to blame for failing to adequately cover the impact of the floods. After the Haitian earthquake, correspondents from almost every news outlet were dispatched to the island, and Canadian broadcasters worked together to air a fundraising telecast.

And he wondered if the reaction to the floods has been impacted by the fact that Pakistan is a Muslim country.

But representatives of Canada’s humanitarian network say there are many interconnected issues at play that could be preventing people from donating.

Pakistan is several time zones away, affecting the flow of information out of the country, and does not share a common language with Canada, as Haiti does.

But he acknowledges that political considerations are also influencing donors. Donations are always slower when natural disasters occur in war-torn nations, he said.

“You have the fact that they’re so close to Afghanistan and Canada’s fighting in Afghanistan,” he said. “I think that in people’s minds those two places are linked, for good or bad.”

Robert Fox, executive director of Oxfam Canada, said his group is now concentrating on educating their donors on the extent of the damage, how many people have been affected and the way that the flood has jeopardized Pakistan’s economy, food security and political stability.

“There’s no question that there is a window. When the window closes, the world moves on and people become inured to the images and are less likely to respond,” he said.

Although it’s harder to solicit donation in summer months, when people are away on vacation, Mr. Fox said he does not believe donor fatigue is at issue. He points out that people were generous in their donations to Pakistan after the Kashmir earthquake of 2005, even though it came on the heels of Hurricane Katrina and the Asian tsunami.

But then, he noted, the Canadian government quickly pledged to match all private donations, eventually putting up $10-million in additional aid.

He said that a promise of matched donations is an incentive for the public, while large contributions by the government can make people feel as though enough has been done. Ottawa has so far pledged $31-million.

There is also the matter of the Pakistani government. The country has destabilized since the 2005 earthquake, with the assassination of Benazir Bhutto in 2007 and the ouster of president Pervez Musharraf the next year.

“There are questions about the government and that does raise doubts,” Mr. Fox said. “One of our challenges is to help people understand we have staff on the ground, we’re not sitting there waiting for a government plan.”