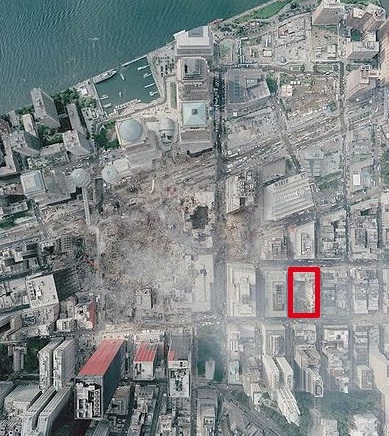 The controversy over the proposed construction of an Islamic center at Ground Zero, where once stood the World Trade Center in Lower Manhattan, is growing with full speed.

It all started when the Cordoba Initiative, headed by American Imam Feisal Abdul Rauf, applied to the New York City Council for a license to build an Islamic center and mosque only 180 meters from where, according to most of its opponents, the “Islamists” struck the hardest blow to America. The planned Islamic center is intended to function more like a community center which includes, in addition to a Muslim prayer room, a 500-seat auditorium, a theater, a performing arts center, a fitness center, a swimming pool and a food court serving halal dishes. The construction of this center, reportedly, is also aimed at eradicating the feelings of ill will generated by the memory of the 9/11 attacks, and promoting interfaith understanding.

Although the project has lofty intentions behind it, the way it has been perceived and portrayed not only signals more harm than good for interfaith understanding, but also raises suspicions as to whether it is yet another stage in the whole setup to increase interfaith discord, to the contrary of the naïve intentions of its proponents.

The reactions to the Ground Zero mosque vary greatly. The opponents have primarily argued that building a mosque where some 3,000 people died due to an act of “Islamist” terrorism would and does offend the loved ones of the dead. This feeling was obvious in some of the protest posters that read “A mosque at ground zero spits on the graves of 9/11 victims!” Giving political meaning to the project, some took it even further: “Building a mosque at Ground Zero is like building a memorial to Hitler at Auschwitz,” “You can build a mosque at Ground Zero when we can build a synagogue in Mecca,” “Mosques in NYC=200+, Synagogues, Churches in Mecca=0” and “Build Churches in Saudi Arabia!” Apparently, hoping to benefit from an already electrified atmosphere, some sought to serve a rather more nuanced agenda as well, carrying “Boycott Turkish goods and products.”

The source of funding for the project has also caused controversy. Opponents point to the fact that according to NBC and the New York Post Imam Feisal told a London-based Arabic language newspaper that he would seek funding from Muslim nations, whereas he earlier told American authorities that he would raise money from the local Muslim community. Recently, a Jewish organization, the Anti-Defamation League (ADL), has joined the debate with a public announcement in which it argued that the proposed construction was neither an issue of rights, nor the right thing to do because it would cause more pain to the loved ones of those who perished in the Sept. 11 terrorist attacks. Although the ADL president later on declared that they would not fight against the proposed mosque, he urged authorities to scrutinize the foreign sources of the funding.

On the other hand, the proponents of the mosque and those who condone its construction argue for the legitimacy of the project on the basis that just like Christians and Jews, Muslims living in New York are entitled to the right to build their places of worship so long as they do not violate the law. Among them, New York City Mayor Michael Bloomberg welcomed the mosque as an expression of freedom of religion exercised in the United States. Many others, including Massachusetts Governor Deval Patrick, supported the construction, arguing that it would help dissociate Islam and peaceful Muslims from those terrorists who act in the name of Islam. Similarly, Rabbi Arthur Waskow of the Shalom Center said the mosque would stand as a living example that Islam is not a tradition of violence, but peace.

Nevertheless, the controversy is gradually turning into a national debate across the United States, attracting the reaction of opponents rather faster than that of supporters. In Florida, a priest and his followers protested outside a Florida mosque and started a Facebook page titled “International Burn a Koran Day.” The group is planning and inviting all to “burn the Koran on the property of Dove World Outreach Center in Gainesville, Florida, in remembrance of the fallen victims of 9/11 and to stand against the evil of Islam.”

So, what should one make of the brewing controversy over this proposed Islamic Center at Ground Zero in lower Manhattan? Is all what it seems to be? Or, could it yet be another move in a bigger design in the making to further damage relations between the West and the Muslim world?

Throughout the last decade the relationship between the West and the Muslim world has been tested and strained so many times over so many issues, both critical and trivial, that one cannot help but suspect the existence of a group of masterminds manipulating the masses on both sides, playing with them like mice in a lab and feeling overwhelming ecstasy every time those masses tear each other apart.

First, came the terrorist attacks on the World Trade Center on Sept. 11, allegedly by “Islamic” terrorists who cannot stand the “Western way of life,” and cannot tolerate “liberal democracy and freedom.” Then, came the “normal reaction” of the two military invasions: one of Afghanistan, which reportedly aimed to pre-empt another terrorist attack on American soil, and the other of Saddam Hussein’s Iraq, which aimed to eliminate an existential threat to the “free world” posed by weapons of mass destruction that had in fact never existed. Once the general framework is set up, the rest has only to follow.

On the one hand, the increased sense of insecurity in the West, particularly in the United States, has occasionally turned into paranoia and fed racist and xenophobic sentiments against Muslims. On the other hand, the skyrocketing number of Afghan and Iraqi casualties, which was never even seriously counted, fanned the growing hatred across the “Muslim world” against the United States and its accomplice, the United Kingdom. The Abu-Ghraib and Guantanamo tortures were followed by the London and Madrid bombings. In the meantime, the Israeli-Palestinian conflict continued like business as usual. Ariel Sharon’s Israel fought with Hezbullah of Lebanon in 2006 when the latter fired rockets into Israeli border towns and snatched two Israeli soldiers. Ehud Olmert’s Israel invaded Gaza in the last days of 2008 in response to the rockets fired into Israeli border towns from Gaza and in order to rescue the Israeli soldier Gilad Shalit. The invasion left some 1,400 Palestinians dead under the watch of the US, thereby further inflaming the hatred against the latter.

On the intellectual front of the “West-Muslim world” battle, the situation has not been much different. In the Netherlands of the “free world,” the director Theo van Gogh was assassinated in 2004 by an “Islamist” because he produced the film “Submission,” which was critical of the treatment of women in Islam. In Denmark of the “free world,” the cartoonist Kurt Westergaard barely survived an axe attack in 2005 by another “Islamist” because he had earlier drawn 12 insulting cartoons of the Prophet Muhammad. In 2008, Dutch parliamentarian Geert Wilders sparked another wave of reaction from the “Islamists” that do not belong to the “free world” when he released “Fitna,” a short film arguing that Islam encourages acts of terrorism and violence against women. Lately, France of the “free world” is likely to take the lead in sparking violent extremism among the “Islamists” as it bans Islamic headscarves in public spaces and continues to set an undemocratic example for other European states of the “free world” that are likely to follow suit.

So, given this sequence of unfortunate events that has strained relations between the West and the Muslim world in the last decade, how should one interpret the latest controversy over the proposed mosque at Ground Zero? One thing is certain: When such a mosque is eventually built as planned, it should not be a surprise to anyone if Christian and Jewish groups living in majority Muslim countries claim their rights to build places of worship and similar religious centers for their communities. While they have every right to do so, it is also obvious that almost none of those Muslim majority countries are prepared and open enough to reciprocate the gesture, unless they undertake dramatic reforms in the realm of freedom of expression and freedom of religion. For that matter, it should not be surprise, either, if “an extremist Christian American who could no longer bear the haunting burden of his loss on 9/11” bombs the Islamic center only to incite further violence from the so-called Muslim world. At the end of the day, the eventual construction of the mosque at Ground Zero is likely to spark further tension between the so-called West and the Muslim world under the current circumstances.

How about an interfaith center instead of an Islamic one?

Yet, the question persists: Is it necessary to build an Islamic center or a mosque at Ground Zero? Not really. In fact, it may be even counterproductive to do so given the bitter controversy it has already sparked.

However, what is urgently necessary is to build proper venues for Muslims to perform their daily prayers as well as the weekly Friday prayer. According to a New York Daily News report, today more than half a million Muslims live in New York City, including 10 percent of all public school children and more than 1,000 Muslim officers in the New York Police Department. One should also add to this the number of Muslim immigrant workers and visitors. As their number grow, it becomes harder and harder for the Muslims of New York City to perform their daily or Friday prayers in warehouses, building basements, or outside on the sidewalks. Muslims have been part and parcel of New York City ever since 1840 when the first Muslim immigration to the US started with the Yemenites and Arabs of the Ottoman Empire. As they continue to be part of and contribute to the prosperity of American society, Muslim-Americans in cooperation with the authorities should establish proper worship places all around New York City instead of symbolic mosques in symbolic locations. As for the proposed Islamic center at Ground Zero, it would be much better if it was turned into an “interfaith center” with the exact same amenities plus Christian, Jewish, Hindu and Buddhist worship places.