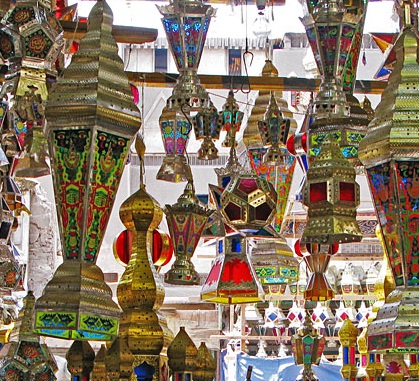 Most Muslims around the world begin observing the holy month of Ramadan on Wednesday, a time when they reflect on what it’s like to go hungry. They fast from dawn to dusk, and break the daily fast by sharing food and charity with those less fortunate, as well as celebrating with family and friends.

Ramadan celebrations are especially famous in Egypt. But this year, the Egyptian government has added a new twist to the holiday by turning back the clock just for Ramadan. That way, people end their fast an hour earlier than they would otherwise, even though the total number of hours they fast will not change.

Egypt has Ramadan traditions that are unique in the Muslim world. Among the most famous are the brightly colored tin and glass lanterns called fanous, which hang for sale by the thousands in the medieval Islamic quarter of Cairo (pictured above).

Egypt has Ramadan traditions that are unique in the Muslim world. Among the most famous are the brightly colored tin and glass lanterns called fanous, which hang for sale by the thousands in the medieval Islamic quarter of Cairo.

The time change makes spice salesman Hossam Adin Mohammed uncomfortable. He wonders why Egypt is the only country creating a time zone for the holiday. Mohammed also hopes it doesn’t violate Islamic law.

Nevertheless, he is certain he and other Egyptians celebrate Ramadan the way the Prophet Muhammad intended.

“Of course we eat a lot, but that is part of the family spirit,” he says. “One night it’s at my place, the next night at my sister’s, and another night at my mother-in-law’s house.”

All the feasting and socializing lead to another less desirable tradition — the “Ramadan Effect.”

Each year, the Egyptian economy slumps during the holy month. Workdays are cut short, and production and stock performance drop. At the same time, public consumption skyrockets, meaning more imports. Some of the additional goods go to the needy, as Islam prescribes.

All over the city, private individuals and charities set up colorful tents packed with free food. Yet too many Egyptians have turned Ramadan into an exercise in excess, says sociologist Said Sadek.

“We have 30 days of Christmas Eve full of banquets and food,” he explains. “Egypt consumes three times its normal food consumption during the month of Ramadan.”

He adds: “They are semi-drugged by media, by food, banquets that are being held because religion advises that it is better that people eat together.”

But even conservative religious groups support the Egyptian festiveness — within limits.

“Certainly our message to Egyptians during Ramadan is no excessive food and no excessive partying or staying up way too late, because that’s hated by Islam,” says Ali Abdel Fattah, spokesman for the Muslim Brotherhood, a political movement that is officially banned in Egypt.