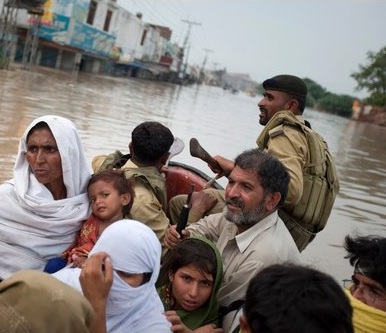 The worst floods in memory in Pakistan have affected more than three million people so far and the death toll has climbed to over 1,500, the UN Children’s Fund (Unicef) has said.

Amid forecasts of more heavy monsoon rains, authorities on Tuesday said they expected the death toll to rise further.

The Swat valley, which has yet to recover from a major Pakistani army offensive against Taliban fighters just over a year ago, is one of the areas worst affected by the floods.

Large parts of the valley’s upper regions, reached by a riverside road, are inaccessible. Scores of bridges, roads and building have been washed away by the torrents.

Swat, in northwestern Pakistan, was hit the hardest by the floods which submerged extensive areas, brought down bridges and swept away entire villages.

Martin Mogwanja, the Unicef representative in Pakistan, told Al Jazeera that the number of people affected continues to increase as the floods spread to the south of the country.

Other relief agencies such as the World Health Organisation said they were rushing in medical kits to affected areas to deal with diarrhoea.

With infrastructure crippled and drinking water sources contaminated, there are growing fears about an imminent outbreak of disease.

Aid agencies and Pakistani government officials will meet on Tuesday to determine whether to make an urgent international appeal for help.

Pakistan’s National Disaster Management Authority said more than 29,500 houses were damaged and a key trade highway to China was blocked by the flooding.

“The entire infrastructure we built in the last 50 years has been destroyed,” a spokesman for the provincial Disaster Management Authority in Khyber-Pakhtunkhwa said.

“The real problem is communication links and road links. You can’t get aid to places if you can’t the here,” he said.

The floods have triggered heavy criticism of the government over its response to the disaster.

Around 300 people blocked a major road in the hard-hit Nowshera district to protest against receiving little or no aid, witnesses said.

“I think this is misplaced criticism. There is a deficiency [of aid] because of the magnitude of the calamity,” Major General Athar Abbas of the Pakistani army told Al Jazeera.

“We are trying our best, taking into account our limited resources to reach out to a maximum amount of people in a maximum of areas,” he said.

“Yes, there are certain areas which were left out, however, so far the rescue operation has been completed and we have gone into a major relief operation, providing provisions to the relief camps as well as medical assistance.”

Many residents who lost their homes and livelihood also complain that they had not received any advance warning that raging waters were heading their way.

President Asif Ali Zardari’s government is already unpopular over widespread allegations of corruption and its failure to tackle politically-explosive issues such as chronic power cuts.

Zardari is currently in Europe on a state visit.

Officials said it was too early to estimate the damage the floods had caused to the economy, but the rains had so far spared the main agricultural heartland in the Punjab.

How can you help?

THE SITUATION     Heavy rains in the past few days have triggered both flash floods and river line floods in several parts of Pakistan, resulting in loss of life and widespread displacement. Khyber Pakhtunkhwa (KPK), Baluchistan, and Punjab have been the worst affected areas.

At least 1400 people have died and over 2.5 million people have been affected by this disaster and have lost their homes and livelihoods. Crops have been destroyed, and roads and bridges damaged. All 7 districts of Federally Administered Tribal Areas have also been affected, according to the FATA Disaster Management Authority, although the severity is unclear. Flash floods have hit almost every district of Punjab, Khyber Pakhtunkhwa and Blochistan in what is said to be the worst flooding in 80 years.

Human Appeal International has commenced its rescue efforts in the Swat region and has also started to distribute food items, bedding items, clean drinking water facilities to the victims in affected areas. We urgently ask you to generously donate to help supply more of these basic necessities to our helpless brothers and sisters.

STORY OF A VICTIM   Shams-ur –Rahman, a resident of village Sharif Killay Khan, unfortunately, is one of the worst hit affectees of the recent vicious Flood of July 2010. Rahman’s family was sleeping peacefully in the rainy night of 31st July 2010, putting aside the traces of the sizzling heat of the previous month, when at 10pm, the big water torrent hit his house. The gushing flood broke down the side walls of the house, burying the three most dearly relations of Rahman; his mother, father, and his niece.   Living together as a family of 4 brothers and 4 sisters along with parents, Rahman is only 30 Years old. He has 2 children of his own. Earning Rs. 200/- daily through labour work was his source of income, which his family was dependent on. A big portion of his house, the accessories and all the essentials have been destroyed in this flood wreckage.
“I was shocked…, I never thought for a moment, the downpour that was gradually sinking the heat waves, could turn up one day into my own destruction, and of the whole village. We have lost everything, my parents, my niece… (said Rahman as he burst into trears). But, fortunately my other brothers and sisters are alive, and only suffered injuries. We are a big family but have nothing to start on.” Taking temporary shelter in Hujra (locally; a spare room for guests) in a neighborhood, the entire family is struggling for food, shelter, bedding and an income source. These distressed eyes are looking for hands to lift them up once again to say we have a home and a living!

HOW YOU CAN  HELP   Human Appeal International is seeking your urgent assistance to help supply the following: