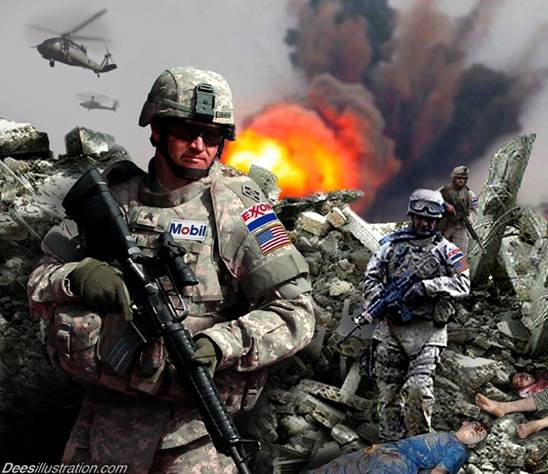 Britain‘s former MI5 chief harshly criticized the 2003 invasion of Iraq, saying Tuesday that her spy agency warned that Saddam Hussein had no known links to Al Qaeda, that Iraq posed little threat, and that some in a generation of British Muslins had been radicalized by the action.

“Arguably we gave Osama bin Laden his Iraqi jihad, so that he was able to move into Iraq in a way that he was not before,” said Eliza Manningham-Buller, director of MI5 – Britain’s rough equivalent of the FBI – from 2002 to 2007.

Ms. Manningham-Buller’s statements to Britain’s Chilcot Inquiry panel, which is investigating the country’s involvement in the Iraq war, are seen as a dramatic criticism of the testimony former Prime Minister Tony Blair gave to the panel earlier this year supporting the toppling of Saddam Hussein.

Al Jazeera reports that the panel has been “marked by politicians and former senior British government officials either defending positions or, perhaps, massaging history to fit their purpose,” which is why Manningham-Buller’s words “came as a significant intervention.” She testified that her agency saw Iraq as a “very limited” or “containable” threat, Al Jazeera adds.

The Guardian calls it a “devastating critique.” The newspaper has also reprinted a declassified letter (see here) she sent to John Gieve, permanent secretary at the Home Office, a year before the Iraq invasion. In it, she wrote that there was “no credible evidence” to suggest a link between Saddam Hussein and Al Qaeda.

Manningham-Buller said in her testimony that after the war her office became overburdened with intelligence on new threats against the United Kingdom and that Iraq became a “single narrative” for many in a generation of British Muslims to see the West as attacking their faith and become radicalized. She revealed for the first time that up to 80 Britons had relocated to Iraq to join the insurgency, the Associated Press reports.

The rise of homegrown terrorism threats was so marked after Britain’s entry into the Iraq war that her agency asked for, and received, a 100 percent budget increase, she added, according to The Independent.

Standing up to Blair

There was no evidence of a link between Hussein and the terrorist attacks of Sept. 11, 2001, according to Manningham-Buller, and the focus on Iraq reduced the focus on Al Qaeda in Afghanistan. She criticized Mr. Blair’s justification for the war – that Iraq had weapons of mass destruction – saying instead the idea that Iraq would use such weapons against the West “wasn’t a concern in either the short term or the medium term to either my colleagues or myself,” the Associated Press reports.

The Independent notes that her words undercut those of Blair, who told the panel: “If I am asked whether I believe we are safer, more secure, that Iraq is better, that our own security is better, with Saddam and his two sons out of office and out of power, I believe indeed we are.” Manningham-Buller’s contradiction of the former prime minister who led Britain into the war could make it more difficult for the current government to review current terrorism laws, The Independent notes.

Manningham-Buller has often stood up to politicians since she left the MI5 spy agency in 2007, the Financial Times notes. Already this year she voiced anger about the Bush administration’s torture of detainees at Guantanamo Bay, saying: “The Americans were very keen that people like us did not discover what they were doing.”

She said in her testimony there was “inadequate challenge” to the predominant thinking on Iraq before the war within the joint intelligence committee – which she sat on – the Financial Times adds. Manningham-Buller also says that she never got to have one-on-one meetings with Prime Minister Blair, and that, in hindsight, she should have challenged the war more, Al Jazeera reported.

FORMER Australian Federal Police chief Mick Keelty’s judgment that the Iraq war had increased the terrorist threat has been vindicated.

It has taken six long years, but he has been vindicated in thunderous fashion during the British inquiry into the US-led conflict.

He was promptly jumped on by the Howard government for contradicting its line on the war.

Yesterday, he was belatedly backed in spectacular fashion by former director-general of MI5 Lady Eliza Manningham-Buller, who told Britain’s Chilcot inquiry into the war that the Iraq invasion had substantially increased the threat of terrorist attacks and was a significant factor behind the radicalisation of young Muslims.

Lady Manningham-Buller said invading Iraq and toppling Saddam Hussein allowed al-Qa’ida to establish a foothold in Iraq that it had never previously managed.

After the September 11, 2001, terrorist attacks in the US, Mr Keelty had been quick to recognise that the AFP’s traditional crime-fighting priorities would have to change dramatically and that the force was poorly equipped to understand the new threat. “We had an almost negligible understanding of radical Islam or the general values of the Muslim community,” he said later.

Mr Keelty admits that at the time of the Madrid comment, he was wounded by the reaction to an honest professional assessment. “I think I was at the time, but I guess, over time, I’ve moved on and I guess everyone else has moved on as well.

After the first terrorist attacks, Mr Keelty made two crucial decisions — to improve relations between the police and the Islamic community as a matter of urgency and to forge close links with police from Asia on issues of transnational crime and terrorism.

Last night, he told The Australian he did feel vindicated by Lady Manningham-Buller’s testimony.

“It’s probably the strongest indication yet that the position I took not only at the time, but subsequent to that, to ensure that the Islamic community was properly engaged and not marginalised in Australia, was an important decision,” Mr Keelty said.

He started by introducing Islamic awareness training in the AFP and put Islamic liaison teams in each state and territory.