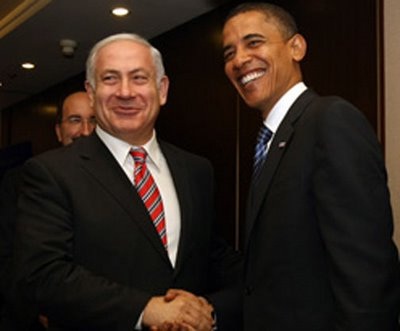 There is one video Benjamin Netanyahu, the Israeli prime minister, must be praying never gets posted on YouTube with English subtitles. To date, the 10-minute segment has been broadcast only in Hebrew on Israel’s Channel 10. (Since the time of writing, the video is now available with English Transcripts  on Youtube – watch at end of article -MV Media Editor)

Its contents, however, threaten to gravely embarrass not only Mr Netanyahu but also the US administration of Barack Obama.

The film was shot, apparently without Mr Netanyahu’s knowledge, nine years ago, when the government of Ariel Sharon had started reinvading the main cities of the West Bank to crush Palestinian resistance in the early stages of the second intifada.

At the time Mr Netanyahu had taken a short break from politics but was soon to join Mr Sharon’s government as finance minister.

On a visit to a home in the settlement of Ofra in the West Bank to pay condolences to the family of a man killed in a Palestinian shooting attack, he makes a series of unguarded admissions about his first period as prime minister, from 1996 to 1999.

Seated on a sofa in the house, he tells the family that he deceived the US president of the time, Bill Clinton, into believing he was helping implement the Oslo accords, the US-sponsored peace process between Israel and the Palestinians, by making minor withdrawals from the West Bank while actually entrenching the occupation. He boasts that he thereby destroyed the Oslo process.

He dismisses the US as “easily moved to the right direction” and calls high levels of popular American support for Israel “absurd”.

He also suggests that, far from being defensive, Israel’s harsh military repression of the Palestinian uprising was designed chiefly to crush the Palestinian Authority led by Yasser Arafat so that it could be made more pliable for Israeli diktats.

All of these claims have obvious parallels with the current situation, when Mr Netanyahu is again Israel’s prime minister facing off with a White House trying to draw him into a peace process that runs counter to his political agenda.

As before, he has ostensibly made public concessions to the US administration – chiefly by agreeing in principle to the creation of a Palestinian state, consenting to indirect talks with the Palestinian leadership in Ramallah, and implementing a temporary freeze on settlement building.

But he has also enlisted the powerful pro-Israel lobby to exert pressure on the White House, which appears to have relented on its most important stipulations.

The contemptuous view of Washington Mr Netanyahu demonstrates in the film will confirm the suspicions of many observers – including Palestinian leaders – that his current professions of good faith should not be taken seriously.

Critics have already pointed out that his gestures have been extracted only after heavy arm-twisting from the US administration.

More significantly, he has so far avoided engaging meaningfully in the limited talks the White House is promoting with the Palestinians while the pace of settlement building in the West Bank has been barely affected by the 10-month freeze, due to end in September.

In the meantime, planning officials have repeatedly approved large new housing projects in East Jerusalem and the West Bank that have undercut the negotiations and will make the establishment of a Palestinian state – viable or otherwise – far less likely.

Writing in the liberal Haaretz newspaper, the columnist Gideon Levy called the video “outrageous”. He said it proved that Mr Netanyahu was a “con artist … who thinks that Washington is in his pocket and that he can pull the wool over its eyes”. He added that the prime minister had not reformed in the intervening period: “Such a crooked way of thinking does not change over the years.”

In the film, Mr Netanyahu says Israel must inflict “blows [on the Palestinians] that are so painful the price will be too heavy to be borne … A broad attack on the Palestinian Authority, to bring them to the point of being afraid that everything is collapsing”.

When asked if the US will object, he responds: “America is something that can be easily moved. Moved to the right direction … They won’t get in our way … Eighty per cent of the Americans support us. It’s absurd.”

He then recounts how he dealt with President Clinton, whom he refers to as “extremely pro-Palestinian”. “I wasn’t afraid to manoeuvre there. I was not afraid to clash with Clinton.”

His approach to White House demands to withdraw from Palestinian territory under the Oslo accords, he says, drew on his grandfather’s philosophy: “It would be better to give two per cent than to give 100 per cent.”

He therefore signed the 1997 agreement to pull the Israeli army back from much of Hebron, the last Palestinian city under direct occupation, as a way to avoid conceding more territory.

“The trick,” he says, “is not to be there [in the occupied territories] and be broken; the trick is to be there and pay a minimal price.”

The “trick” that stopped further withdrawals, Mr Netanyahu adds, was to redefine what parts of the occupied territories counted as a “specified military site” under the Oslo accords. He wanted the White House to approve in writing the classification of the Jordan Valley, a large area of the West Bank, as such a military site.

Last week, after meeting Mr Obama in Washington, the Israeli prime minister gave an interview to Fox News in which he appeared to be in no hurry to make concessions: “Can we have a negotiated peace? Yes. Can it be implemented by 2012? I think it’s going to take longer than that,” he said.

Below is a transcript of the Second-Intifadah era conversation, supplied by Dena Shunra, a Hebrew<>English translator living and working in the United States. Note that Netanyahu quotes his extremist father counseling him to give up 2 percent of Hebron (during the Wye negotiations) so as to maintain the Jewish settlements there and get people off Israel’s back. And note that Netanyahu’s defiance about American opinion extends to the whole world. When his interlocutor asks about world opinion re continued conquest/settlement, he says, “The world won’t say a thing. The world will say we’re defending.”

“Background: Netanyahu is visiting the home of a woman who just lost her husband, and she is being cheered by five other widows. There’s a young boy present, and Netanyahu asks (at about 3:00) that they turn off the camera so he can speak to them ‘freely’. The camera gets turned on again in mid-conversation.”