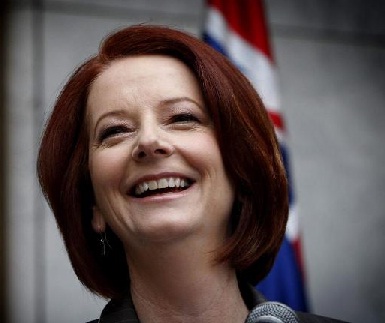 Australian Jewish leaders have welcomed the appointment of Australia’s first female prime minister Julia Gillard, who has been supportive of Israel.

Julia Gillard was elected unopposed in a Labor Party caucus meeting Thursday after Prime Minister Kevin Rudd agreed to a leadership ballot triggered by a slump in the polls.

Gillard, from Labor’s left faction, was widely considered an unknown quantity on Israel when she was elected deputy leader in 2006.

But she “stood like a rock during the Gaza incursion [in 2009], reiterating again and again that Hamas began the conflict by rocketing Israel,” said Michael Danby, a Jewish lawmaker in the Labor government.

“Having been to Sderot, unlike so many of Israel’s critics, she understood and defended Israel’s right and need to defend its civilian population against repeated and indiscriminate missile attacks from Gaza,” Rubenstein said.

Rudd, a staunch supporter of Israel, recently had come under fire from Jewish leaders for expelling an official from the Israeli Embassy in Canberra over the Dubai passports affair. Gillard stayed largely silent on the controversial affair.

An election is likely later this year.

Julia Gillard On Israel: A Retrospective

“A fellow student activist says [Julia] Gillard has always been ‘very much on the pragmatic side’. She was always that way in student politics. She was more inclined to deal with the Liberals, the Zionists and various right-wing groups than she was with the Left.” (She’s got it, Stevenson & Banham, Sydney Morning Herald, 5/7/03)

“[Zionist Federation of Australia (ZFA) president Philip] Chester said the fact that he had ‘never heard [Julia Gillard] say a word about the Middle East’ was no indication of any lack of support for Israel, but added that he was more comfortable with Gillard filling the deputy role having been to Israel, which she visited for the first time last year.” (Rudd ‘good for the Jews’, but Gillard still untested, The Australian Jewish News, 7/12/06)

“Julia Gillard has brought a new abbreviation to the world of politics. In Canberra’s corridors of power she is now simply referred to as DPM, a contraction of her position in relation to Kevin Rudd that ignores her other responsibilities as Minister for Education, Social Inclusion, Employment & Workplace Relations. She also appears to be wavering in her habit of acknowledging traditional land owners at the beginning of her speeches. Addressing the Jewish National Fund in Melbourne on Wednesday evening, she acknowledged Albert and Debbie Dadon, Michael Danby, David Ben-Gurion and Mark Dreyfus before giving a nod to the Wurundjieri people and their past and present elders.” (Shortcuts for Gillard, DD McNicholl, The Australian, 6/6/08)

“Israel’s air strikes were a response to an ‘act of aggression’ by Hamas which had broken the ceasefire. ‘We are saying to Hamas that they should cease any further action’.” (Gillard in A time for fighting, Jason Koutsoukis, SMH, 29/12/08)

“Every nation has its own experience of struggle. But some peoples have experienced suffering of a kind that does not bear any comparison. Instead, we can only bear witness to it. That is why our delegation, with humility, will visit Yad Vashem to pay our respects and reflect on the horror of the holocaust.” (Gillard, Speech to the Australia Israel Leadership Forum, deewr.gov.au, 22/6/09)

“Gillard deserves particular praise for attending the [Australia-Israel Leadership] Forum, as she was subject to a nasty campaign from the Left to try to intimidate her out of going. The Left internationally is going through one of its periodic bouts of trying to isolate Israel. This is one of those demented moments where allegedly progressive opinion believe it’s the height of creativity to engage the mullah dictatorship in Iran, as it steals elections and pursues nuclear weapons, but wrong to visit a democratic ally such as Israel. The Rudd government has stood four square against this nonsensical position, as demonstrated in Kevin Rudd’s long telephone conversation with Israel’s Prime Minister, Benjamin Netanyahu earlier this week… Gillard also met Netanyahu and Israeli President Shimon Peres. Gillard’s outlook on national security and international relations generally has matured and deepened enormously over the past few years. She certainly believes what she says. But there is also a good political dimension to what Gillard is doing. A Labor politician from the Left, she aspires one day to the prime ministership. The traditional doubt about the Left is that they tend to be anti-American or simply unreliable on national security. Gillard has given a series of speeches and performances that demonstrate she is 100% with Rudd in the mainstream Curtin-Hawke Labor tradition on the US alliance, the deployment of Australian forces overseas and indeed Israel and the Middle East.” (Gillard prime ministerial in Israel, Greg Sheridan, The Australian, 25/6/09)

“I walked away from my conversation with the Israeli prime minister believing there was a real preparedness for a genuine discussion. He genuinely wants to step forward and engage in a discussion about peace.” (Gillard on Radio National’s Sunday Profile, 2/7/09)

“A study of the transcripts of Ms Gillard’s speeches and interviews, from her recent trip to Israel… reveals that the word ‘Gaza’ did not once pass her lips. Challenged by a reporter to say whether she believed Israel’s treatment of the Palestinians was ‘fair and just’, she avoided the question and retreated into platitudes: ‘We are concerned about the humanitarian situation of the Palestinian people’. This amounts to connivance with what the late Israeli political scientist Baruch Kimmerling called ‘politicide’: Israel’s desire to have the outside world forget Palestinian political aspirations to self-determination, and regard their struggle in purely humanitarian terms.” (Politicide or politic: Gillard & the Gaza muzzle, Jake Lynch, SMH, 10/7/09)

“Over the years I have received tender messages from Gillard saying how much she misses me in Canberra… One of them concerned her study tour of the US, sponsored by the American government in 2006 – or to use her moniker – ‘a CIA re-education course’… She promised ‘to catch up when I’m back from the US and I’ll show you my CIA-issued ankle holster’. I never got to see her ankles or her holster, but I will say this: you have to hand it to those guys in Washington… Within the space of 2 years they converted her from a highly cynical critic of all matters American into yet another foreign policy sycophant.” (Latham turns on ‘brainwashed’ Gillard, Christian Kerr, The Australian, 20/8/09)

“[My trip to Israel] reinforced in me that the judgements we made at the time [of the 2008/2009 Gaza massacre] were the right judgements… We, as a nation, have always been very strong on supporting Israel’s right to defend itself and to seek security in the region. When you’ve got a circumstance where rockets continue to be fired at Israeli communities, then the Israeli government is going to react.” (Gillard: trip to Israel vindicated Government stance on Gaza, The Australian Jewish News, 21/8/09)

“A former jazz guitarist who is developing a $450 million Melbourne tower has persuaded Deputy Prime Minister Julia Gillard’s partner, Tim Mathieson, to give up his hair-care business to sell residential property instead. Albert Dadon hired Mr Mathieson as a contractor to find international buyers for apartments in the 50-storey project that overlooks Flagstaff Gardens. The appointment tightens the links between Mr Dadon and Ms Gillard after her visit to Israel in June as a guest of the Australia Israel Cultural Exchange, which he founded and chairs. Mr Dadon was the artistic director of the Melbourne Jazz Festival for several years but has emerged in recent times as executive chairman of Uberta Group and a good friend of the Rudd government. He sponsored Kevin Rudd on a visit to Israel in 2002 when the Prime Minister was Labor’s foreign affairs spokesman, and did so again in 2005. The two had lunch together shortly before the 2007 federal election, The Age reported earlier this year. Mr Dadon is married to Debbie Besen, daughter of Highpoint property Group chairman and Sussan clothing store founder Marc Besen. Ms Gillard disclosed her partner’s appointment to Ubertas Group in a letter to the registrar of members’ interests last Friday, saying the new job had started last month. A spokesman said Ms Gillard did not expect any perceived conflict of interest to arise from the job.” (A man of many properties, David Crowe, Australian Financial Review, 23/10/09)

“Perhaps the most remarkable factor in Labor’s apparent love affair with Israel is not Mr Rudd, but Ms Gillard… Last Sunday, after a gushing address in Melbourne to the Australia-Israel Leadership Forum, during which she described the two-day conference as ‘a special kind of conversation between friends’, she danced the hora with Jewish women… Could the Welsh-born deputy PM genuinely believe in the veracity of Israel’s case, having visited there twice in recent years? Or has she caved in on the issue following pressure, real or perceived? Or is there a third possibility? As one Jewish leader put it, ‘She wants to be Australia’s first female prime minister and she knows that means currying favour with the Jews’.” (Australia renews its love affair with Israel, Dan Goldberg, thejc.com, 10/12/09)

“Gillard has moved to create her own positive national security identity bang in the middle of the mainstream. For several years she has been attending the Australian-American Leadership Dialogue. I heard her speak at the State Department in Washington in July 2008 and she was clear and declarative about her attachment to the US alliance, not only for its contribution to Australian security, but – as John Curtin put it – for its contribution to civilization and civilized values. Similarly, a year ago Gillard attended the first Australia-Israel Leadership Forum in Israel… Her message in foreign affairs and national security is one of continuity and reassurance. The lady’s not for lurching.” (Leader to stay true on foreign affairs, Greg Sheridan, The Australian, 25/6/10)

“On foreign policy… expect little change. Gillard the former campus radical has made the transition to the safe mainstream consensus without a ripple. In her address after the leadership change yesterday, the only foreign subject touched upon was Afghanistan, in the form of a tribute to the soldiers serving there. She has been a participant in the second-track diplomacy effort known as the Australian-American Leadership Dialogue, and in the newer Australia-Israel forum set up last year. In these two sensitive areas, where politicians are carefully watched for deviation by powerful lobbies, she has flagged her adherence to the norm.” (SMH editorial, Julia Gillard gives Labor a new start, 25/6/10)