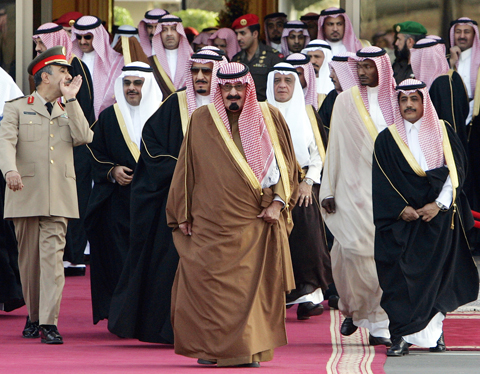 This makes Al Maiman singularly qualified for his new role in a crucial ideological struggle that is taking place in the kingdom and throughout the Muslim world. He is charged with organizing an international conference on the ancient Islamic practice of takfir. More than just another academic conference, it is part of a concerted effort by the House of Saud and top theologians here to reclaim core concepts of Islam that have been warped and misinterpreted by militants.

In recent decades, extremist groups like Al Qaeda have used takfir — hijacked may be a better word — as the theological underpinning for their ideology and to justify murdering other Muslims.

Across the Middle East, they invoke takfir to kill and threaten women for not covering their hair, Iraqis for working with American occupiers, novelists for writing racy scenes, television executives for airing romantic soap operas and government officials for being part of what extremists call takfiri, or infidel, regimes.

“The danger of this ideology is greater now than it has ever been,” said Al Maiman on a recent rainy night in Riyadh. “It is the most dangerous because whoever adopts this ideology … also believes that he has the duty of … expressing it through acts. And they reach a stage where they pay [with] their own lives … for this belief.”

Seated in the royal reception hall of the university, where he is an assistant professor in Islamic law and jurisprudence, Al Maiman provided GlobalPost a rare interview. He wore a gold-trimmed formal vestment, and an uncut black beard to signify his devotion to emulating the Islamic prophet Muhammad. And he was passionate about what he sees as widespread abuse of takfir by extremists.

“Takfir in Islam is a principle that is governed by its own rules, and not open to the whims and judgments of people,” he said. “It is first and foremost a judicial sentence, and not just hearsay which people can talk about. … Only Shariah courts can say and prove that one is an apostate.”

According to the “Encyclopaedia of the Quran,” the entry on “Belief and Unbelief” suggested that the word “takfir” does not occur in the Muslim holy book. And takfir is condemned in the writings of the hadith, the narrations originating from the words and deeds of the Islamic prophet Muhammad. It appears the concept emerged through history and evolved in a cultural and political context to become an effective theological instrument for excluding someone from the Muslim community.

The conference that Al Maiman is organizing — to be held in September in Islam’s holy city of Medina — is intended to reclaim the concept of takfir and restore it to its proper theological place, based on the best thinking of Islamic religious scholars from around the world.

Co-sponsored by the university, it will “find practical solutions” to the current “phenomenon” of takfir, which “hides under misleading masks, falsely attributing itself to Islam, emerging from religious extremism, and ending with bombing,” according to a conference brochure.

The forum is part of an ongoing, multi-faceted government campaign to discredit what its calls the “deviant” ideology of extremist groups.

Launched after a wave of terrorist bombings in the kingdom in 2003 and 2004, the effort also includes a prison rehabilitation program for detained Al Qaeda sympathizers and militants, some language revisions in religious textbooks, and a religious ruling, or fatwa, issued last month by the kingdom’s top clerical body criminalizing financial support for terrorist groups. King Abdullah bin Abdul Aziz’s 2008 interfaith dialogue conference in Madrid was also part of this official reinforcement of Islam’s traditional moderation and tolerance.

The government’s decision to focus now on takfir is significant because — in a region where Islamically based concepts influence devout populations — takfir gives extremists a theologically sound way to justify attacks on governments and renounce the Sunni Islamic tradition that forbids rebellion against a ruler.

Takfir “is the key to revolutionary violence,” explained Thomas Hegghammer, a scholar of Islamist politics at Princeton’s Institute for Advanced Study. “Arab governments fear it because that is what legitimizes violence against them.”

Hegghammer, author of the just published “Jihad in Saudi Arabia,” added: “In Saudi Arabia, for example, a big issue for Al Qaeda was the targeting of security forces. Al Qaeda’s main declared aim was to attack Westerners, but Saudi police protected Westerners. So what do you do with those security forces? That is where takfir comes in. … ‘Oh well, we can just kill them because they’re infidels too.’”

Scholars like Hegghammer see irony in the Saudi government’s attempt to limit the extremists’ profligate use of takfir because the practice was once a pillar of the kingdom’s ultraconservative brand of Islam, commonly known as Wahhabism.

“Certainly until the mid-20th century there was a prominent element or school in the Wahhabi establishment that applied takfir to other Muslims” who did not adhere to this ascetic strain of Islam, said Hegghammer. In the 18th century, he noted, Wahhabis “killed other Muslims on the basis that they were polytheists.”

David Commins, history professor at Dickinson College in Pennsylvania and author of “The Wahhabi Mission and Saudi Arabia,” said that in the 1800s some Wahhabi clerics even banned travel “to Iraq or Kuwait on the grounds that it’s forbidden to travel to the lands of the infidel. … They’re talking about going to Cairo, Baghdad and Damascus!”

The founder of modern-day Saudi Arabia, King Abdul Aziz bin Saud, put an end to physical attacks on other Muslims when he brought his Wahhabi allies under his control early in the 20th century.

But, said Commins, “I don’t think the Saudi religious establishment, the scholars, adjusted their teachings at the time. … This [conference] might be part of the adjustment. … It sounds like this is part of the very gradual and painful accommodation of Wahhabi doctrine to living in a globalized village.”

The ruling House of Saud derives much of its legitimacy from its alliance with the Saudi religious establishment, which for decades was permitted to preach what other Muslims regard as an intolerant version of Islam. This intolerance was later appropriated into the ideology of extremist groups like Al Qaeda.

Al Maiman is well-placed to critique that ideology. From junior high through his doctorate, he studied at Al Imam Mohammed bin Saud University or one of its satellite schools, acquiring the deep knowledge of Islamic jurisprudence that puts him among this country’s recognized religious scholars. His specialty is applying Islamic law to contemporary issues.

“Takfir has been increasing noticeably [because of] the emergence of numerous organizations that adopt it as a principle upon which they operate,” he said as we sat under the radiance of several giant chandeliers in the royal hall at the university.

Al Maiman had on a brown bisht, the flowing, gauzy robe that Saudi men don for formal occasions, and a traditional red-checkered headscarf. As is customary with those who follow the ultraconservative approach to Islam, he did not shake hands with his female visitor. But he smiled often and looked at his questioner when speaking.

“Let me clarify again that only courts are to handle this matter, and [takfir should not be] used as an accusation tool or to label societies. It applies only when a Muslim commits a deed which throws him out of the circle of Islam. This is called ‘a reason of blasphemy,’” he said. And such orders are only issued when “evidence can be proven.”

Some, however, ignore these legal constraints, Al Maiman added, abusing takfir “either to stray away from the mainstream, or pursue certain goals, [which] could be political goals.”

Referring to unconfirmed media reports that there had been discussions about making takfir declarations by unauthorized persons a criminal offense, Al Maiman said “there should be a firm stand on this issue, especially when seeing the mess people are creating when issuing takfir fatwas. “The danger in takfir … is that they take it to a new level of confrontation,” he added. “This should be restricted to the [clerical] community.”

But even within the clerical community, takfir is sometimes misused to condemn behavior that most Muslims do not see as wrong or that is not clearly banned by Islamic law.

For example, Abdulrahman Al Barrak, an elderly, conservative sheikh, recently declared that anyone permitting men and women to mingle in public places was an apostate and should be executed unless he recanted. This is an awkward ruling because the king himself inaugurated a co-ed university last fall. Al Barrak’s takfir fatwa got a mixed reception from fellow clerics. Some supported it; some criticized it.

Al Maiman’s insistence on the role of courts underscores how the battle to control takfir is part of a much larger struggle throughout contemporary Islam: Who has authority to speak for this global faith? Unlike most Christian denominations, Islam has no hierarchy or official clergy to issue definitive religious rulings. The best that can be hoped for on many controversial issues is consensus.

The upcoming conference, observed Commins, is “trying to reinforce the concept that to declare somebody as an unbeliever resides in a certain kind of authority … based on deep religious learning that the Saudi religious establishment lays claims to. And they say that the trigger-happy takfiris are not expert in religious texts. So it really comes down to who has the authority to interpret these texts.”

Adds Hegghammer: “What this really is about is not takfir, but the privatization of takfir … [and] the power to say what is right in Islam. It’s just the latest in a 50-year-old or longer struggle over power between [clerics] and laymen.”

The September colloquium, also co-sponsored by an institute called the Nayef bin Abdul Aziz Prize for Sunnah and Contemporary Islamic Studies, will be hosted by King Abdullah and Interior Minister Prince Nayef, who also is second deputy prime minister.

Al Maiman said it “is representing Islam as a whole, not one group or country,” and that a call for papers brought in 450 offers, which are being winnowed to about 80 for official presentation.

“Thanks to God,” he said, “we have received overwhelming response from many nations, not just Islamic, but also other countries” including the United States, Europe and Australia. Participating scholars will include non-Muslims, he added.

A key question, of course, is how much influence such a conference will have on young men who are susceptible to the lure of militancy. Al Maiman said they have thought about that, and don’t want it to be “just a bunch of papers presented within a certain period of time.” So they also will have “an exhibit [on] the dangers of takfir,” books and a website “to start dialogue with youth.”

Al Maiman hopes the conference will improve relations between Muslims and others. “The world is now a small village [with] a need for Muslims to communicate with other nations. Therefore we need to show the good spirit of Islam,” he said. “Having such negative views affects Islam in a harmful way, especially in cases where one is thought to be a representative of Muslims and in reality he is not.”