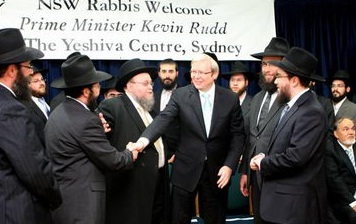 When Australian Prime Minister Kevin Rudd sat down to dinner in the Lodge with six leaders of the Jewish community this month, several remarked at the trouble he’d taken; the Prime Minister had ordered kosher food, flown from Melbourne, for the event. It was a nice touch, but not enough.

Rudd convened the dinner as a reconciliation with Australia’s Jewry. He was the first prime minister to invite the Jewish leadership to address a crisis in relations since Malcolm Fraser after the outbreak of the first Lebanon war in 1982. But it was going to take a lot more than a kosher dinner to allay the anxiety, anger and frustration around the Lodge dining table.

The Jewish community was deeply disturbed by the abrupt change in the government’s Israel policy. And Rudd’s treatment of the local Jewish fraternity, too. He had always been strongly pro-Israel. A former chairman of the World Jewish Congress Isi Leibler last year described him as “a Christian Zionist – he understands and has some sympathy for us”.

Australia had long been one of the Israel’s three most supportive friends, along with the US and Canada. But now there were troubling signs that Rudd had decided to distance Australia from the Jewish state and himself from the Australian Jews he had called friends.

It started in February with the government’s angry reaction to news that assassins with the Israeli intelligence service Mossad had forged three Australian passports to enter the United Arab Emirates to kill a Hamas military commander, Mahmoud al-Mabouh, in his hotel room. “Australia would not regard that as the act of a friend,” said Foreign Minister, Stephen Smith.

It sharpened a week later when Australia switched its vote in the United Nations to signal a weakening of support for Israel. The government feigned surprise when asked if this was a rebuke for the abuse of the Australian passports but it was a deliberate and unmistakeable retaliation.

The concern intensified last month when the government expelled an Israeli diplomat as a punishment for the passports abuse. Britain did the same, as would Ireland, but France and Germany merely rebuked Israel with a public statement. Tony Abbott called the expulsion an overreaction.

All through this, the Israeli ambassador to Australia and some members of the Jewish community felt a chill in their dealings with the government. Phone calls went unreturned, normal dealings seemed to be suspended.

The Jewish community reciprocated. When Labor approached key groups to hold fund-raising events for the coming federal election, they feigned busyness, but it was a deliberate and unmistakeable retaliation.

The Jewish community was an important source of Labor funds for the 2007 election. A single lunch in Sydney raised $100,000. A Toorak tennis court party for 200, attended by Rudd and Julia Gillard, raised more.

But as this year has unfolded, it became increasingly clear such effort would not be repeated. Last month, as Rudd’s poll numbers weakened, the activist Jewish Labor MP Michael Danby was surprised to receive a visit from Rudd’s chief of staff, Alister Jordan, the first in three years.

Danby told Jordan of Jewish concerns. As a result, he and another Jewish Labor MP, Mark Dreyfus, found themselves in Rudd’s office with the Prime Minister and his Foreign Minister. Rudd got the message. He set up the dinner for a week later, June 3.

In the meantime, Israeli commandos raided the unarmed flotilla in international waters, killing nine civilians and shocking the world. Rudd’s response seemed to confirm the worst fears of Israel and its advocates. “When it comes to a blockade against Gaza, preventing the supply of humanitarian aid, such a blockade should be removed,” he told reporters. This was widely reported as Rudd calling for an end to the blockade. This would allow Hamas to arm itself for war on Israel.

Two days later, when Rudd and Smith welcomed the six Jewish leaders to the Lodge with a statement of their strong support for Israel, Rudd got a tough rejoinder from Mark Leibler, chairman of the Australia-Israeli and Jewish Affairs Council. He told them he was “deeply troubled” by Rudd’s stand on Israel. He spent 15 to 20 minutes recalling their former dealings, repeating Rudd’s pledges of support, then detailing his concerns. Rudd responded point by point.

He said his remarks on the blockade were misconstrued. He meant it should be lifted for humanitarian aid and not military supplies. This is what Israel is moving to do.

Smith added that the government had called for an independent Israeli inquiry into the commando raid on the flotilla and not an international inquiry that might lead to another Goldstone report.

Rudd denied any “freezing out” of Israel’s ambassador, or of the Jewish community. He pointed out that his foreign policy adviser Phillip Green, also at the dinner – “he sits in the office next to mine” – had a number of dealings with the ambassador during this period and took calls from Jewish leaders. On the passports affair, Rudd stood his ground. He said he was personally hurt by Israel’s abuse of Australian passports, he had a duty of care to passport holders, but said the matter was now in the past.

It was time for a “new momentum” in Australia’s relationship with Israel. He said Australia would send Trade Minister Simon Crean to Israel, and this would doubtless lead to a reciprocal visit and a new energy.

He promised new funding for the secure schools program, which provides security to Jewish schools, now the first $20 million was spent. The Jewish leaders left the Lodge shaken by the events of the last months but largely satisfied with Rudd’s assurances and his promises. Which is just as well, because the food was reportedly terrible. The crisis over, fund-raising events for Labor are expected to resume.