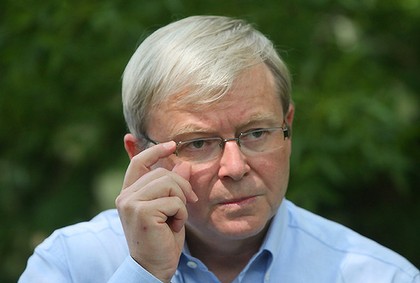 Australian Prime Minister Kevin Rudd attempted to rebuild bridges with the Jewish community last Thursday in the wake of the Government’s comments regarding the flotilla crisis and the expulsion of an Israeli diplomat over the passport affair.

Joining the group for a kosher dinner in The Lodge’s dining room were MPs Michael Danby and Mark Dreyfus. “The group discussed recent developments in relations with Israel, and confirmed that the bilateral relationship was strong, and that the Government will be pressing ahead with the next phase of the relationship,” a spokesperson for the Prime Minister said.

It was the first time a Prime Minister had invited community leaders for an intimate, private meeting since Malcolm Fraser’s invitation following the First Lebanon War broke out in 1982.

According to participants, Rudd explained the Government’s decisions and the reasoning behind those decisions. Participants then spoke in turn, expressing their thoughts on recent events.

“The dinner was an important opportunity for those present to engage in a frank, friendly and constructive exchange,” Goot said after the meeting. “The meeting was both welcome and timely and the Prime Minister’s and Foreign Minister’s positive remarks on a number of new initiatives, gives us great confidence that the relationship between the Jewish community and the Government will continue to be close and cooperative as we focus on the future.”

Those initiatives include an official visit by Trade Minister Simon Crean to Israel from July 14-17 and the receipt of an official Israeli ministerial delegation by Canberra in coming months.

The Prime Minister expressed his own wish to visit Israel for a third time, but said domestic matters were keeping him at home.

Rudd emphasised that unlike most other countries, Australia had not called for a United Nations investigation after Israel confronted the flotilla of activists trying to break the Gaza blockade.

“There was no specific singling out of Israel for condemnation, just a condemnation of violence,” Leibler reported.

Rudd also called for a greater flow of humanitarian aid into the Hamas-controlled zone, but at no time spoke in favour of the removal of the blockade, noting that it was vital Israel prevented arms shipments into Gaza.

On the matter of passport forgeries and whether or not the Australian Government was right in its decision to expel an Israeli diplomat, Leibler admitted that Rudd and some of the other dinner guests had “a difference of opinion there”.

Sydney Jews to hold a rally in support of Israel

A pro-Israel peace rally that has divided the Sydney Jewish community has moved locations, but will go ahead on Monday afternoon (June 14).

NSW State Zionist Council (SZC) moved the rally from the city to Barracluff Park in North Bondi, after a meeting with the NSW Jewish Board of Deputies (JBD) and Communal Security Group (CSG).

The Sydney community was divided after the JBD expressed its opposition to a rally. Board president Robin Margo said: “The consensus view of the board executive is that public rallies are not the best way to counter the delegitimisation of Israel in the aftermath of the flotilla incident.”

Margo noted that the board and SZC had addressed events at Central Synagogue and Kehillat Masada, saying: “We are otherwise focusing our energies on what works as the most effective way to support Israel.”

But he added: “Some in the community, however, want to have a rally and they are entitled to do so.”

He said that if the SZC does stage such an event, “the board will, as a further sign of its solidarity with Israel and of community unity, support the rally. I will attend as I expect will other members of the board executive.”

Expressing his belief in the value of a rally, SZC president Frank Levy said: “It is important to show that people in Sydney are very strong supporters and their heartache in Israel is our heartache here.”

AUJS NSW chairperson Danny Rod said there would be no official involvement from his organisation. However, he added, “I would still attend, as a young Jewish student, in a personal capacity. It’s important to know that if people feel strongly we advocate for them to write letters to news organisations and tweet, and re-tweet, pro-Israel articles of support.”

AUJS Victoria has expressed the same sentiments. “In the past we have taken a proactive response, but here the community was against us doing it and we knew it would be aggressive,” AUJS Victoria chairperson Tamara Better said.

ZVC executive director Ginette Searle said the idea of a rally has not divided the Melbourne community. “At this stage we are not conducting a rally, but we had a briefing session with more than 300 people and we gave them the tools, information and contacts to be active advocates for Israel,” she said.