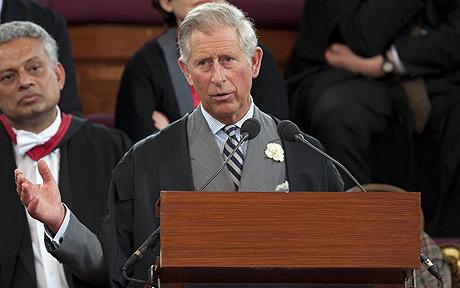 In an hour-long speech, the heir to the throne argued that man’s destruction of the world was contrary to the scriptures of all religions – but particularly those of Islam.

He said the current ‘division’ between man and nature had been caused not just by industrialisation, but also by our attitude to the environment – which goes against the grain of ‘sacred traditions’.

Charles, who is a practising Christian and will become the head of the Church of England when he succeeds to the throne, spoke in depth about his own study of the Koran which, he said, tells its followers that there is ‘no separation between man and nature’ and says we must always live within our environment’s limits.

The prince was speaking to an audience of scholars at the Oxford Centre for Islamic Studies – which attempts to encourage a better understanding of the culture and civilisation of the religion.

His speech, merging religion with his other favourite subject, the environment, marked the 25th anniversary of the organisation, of which he is patron.

The Prince of Wales spoke about the great importance and respect the Islamic faith attaches to the preservation of the environment. He said: ‘From what I know of the Quran, again and again it describes the natural world as the handiwork of a unitary benevolent power.  It very explicitly describes Nature as possessing an “intelligibility’ and that there is no separation between Man and Nature, precisely because there is no separation between the natural world and God.  It offers a completely integrated view of the Universe where religion and science, mind and matter are all part of one living, conscious whole.

‘If I may quote the Quran, ‘Have you considered: if your water were to disappear into the Earth, who then could bring you gushing water?’

This is the Divine hospitality that offers us our provisions and our dwelling places, our clothing, tools and transport.  The Earth is robust and prolific, but also delicate, subtle, complex and diverse and so our mark must always be gentle.’

The Prince also noted that these teachings were also evident in Judaism and in his own faith, Christianity and were well expressed in the writings of Islamic poets and scholars, and Western poets like Wordsworth.

Ending his speech, The Prince said: ‘There is a profound truth in that seemingly simple, old saying of the nomads ­ that “the best of all Mosques is Nature herself”.’