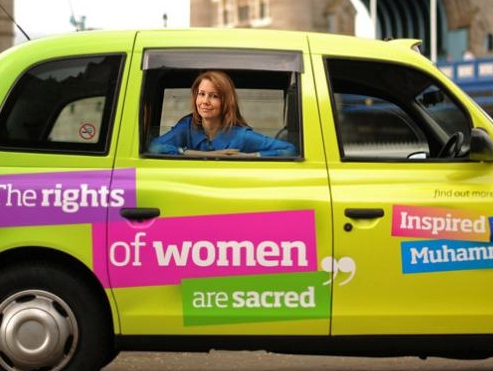 A British foundation has launched a drive to educate the public about Islam and Muslims in a move that comes on the heels of a national poll revealing that more than half of Britons associate Islam with extremism and terrorism.

The Exploring Islam Foundation (EIF) has launched a high-profile media campaign — complete with advertisements at public transportation hubs and on taxis — to promote broader awareness of the facts about Islam’s ethical principles and core beliefs. The “Inspired by Muhammad” campaign (www.inspiredbymuhammad.com) aims to highlight how British Muslims are driven by their faith to contribute positively to the society they live in, focusing on three main areas: women’s rights, social justice and the environment.

The necessity of such a campaign is perhaps demonstrated most clearly through the results of a YouGov national opinion poll the EIF commissioned at the end of May on British views of Islam. The results revealed serious issues regarding the place of the Muslim minority in British society: 58 percent of respondents associate Islam with extremism and 50 percent associate the religion with terrorism, while 33 percent believe Islam to be a violent religion. According to the EIF’s poll data, only 19 percent of Britons believe Islam has a positive impact on British society — and a staggering 68 percent believe the faith encourages the repression of women.

The survey also probed the public’s sources of information on Islam, and the fact that 98 percent of respondents gained their “knowledge” of Islam from newspapers and television is telling. The EIF poll results leave space for hope, however, that British Muslims can still get their message across: 33 percent of respondents expressed an interest in learning more about Islam.

“Inevitably we are concerned by the often inaccurate and negative stereotypes of the faith on our screens and in our newspapers. … But we are hopeful, and believe that if British Muslims tell their positive stories then we can begin to change attitudes for the better,” EIF campaigns director Remona Aly said in a press statement on Monday, when the campaign was launched.