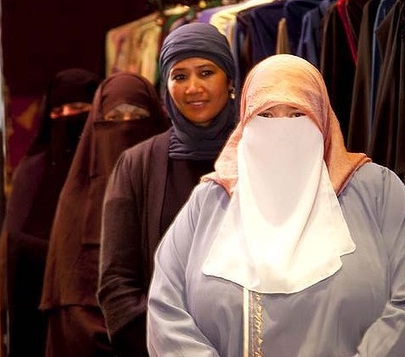 UMM Yusuf, an Australian convert to Islam who lives in suburban Fawkner, is finishing her afternoon prayers. The house is fragrant with the smell of the tomatoes, cumin and coriander her Bangladeshi husband is cooking in the kitchen.

I’m sitting on cushions on a richly patterned rug on their living room floor, waiting. I smile at the three girls and their brother gazing at me with unashamed curiosity. I’ve come to ask their mother about how she embraced Islam as a teenager 17 years ago and then converted, and how she came to wear the face-veil known as the niqab soon after.

She asked that I give her name as Umm Yusuf, an Islamic honorific meaning ”mother of Yusuf”. Back when she converted, she says, ”I didn’t know there were any women in Melbourne that did wear the niqab.” Yet now she says it gives her a great sense of freedom.

The niqab (face veil) and burqa (full body covering), which vary in style from region to region, have attracted recent controversy in Australia. Liberal Senator Cory Bernardi has labelled the burqa ”un-Australian” and called for a ban based on his belief that it signals Muslim women’s oppression. He also said he wanted to prevent a possible boom in bank robbers who might abandon hoodies or ski masks for niqabs.

Politicians have similarly called for legislation to ban face-veiling by Muslim women in Belgium, France, Spain and elsewhere. But according to Sherene Hassan, vice-president of the Islamic Council of Victoria, such ideas show cultural arrogance. ”For many people it’s inconceivable that a woman would choose to wear niqab,” she says, ”so therefore they make the conclusion she must have been forced.”

Hassan says she has never heard of any women being forced to wear the niqab and she points me to Prime Minister Kevin Rudd’s statement that no law-enforcement agency has recommended a ban.

Tasneem Chopra, of the Islamic Women’s Welfare Council of Victoria, says they have never had a request for help from a woman being forced to ”veil”.

This is where I have to disclose my interest. I’ve been a Muslim for more than a decade, and have never known anyone who was forced to veil. I started wearing the hijab (the head scarf) as soon as I converted, but didn’t try veiling my face until 2002 while I was studying Arabic in Yemen.

There, in the narrow streets of its capital, Sanaa, I would pass women in long black dresses, their faces, and sometimes their eyes, veiled. Some of the older women still wore a traditional, colourful cotton wrap from head to toe, their faces completely covered with a thin black cheesecloth patterned with large red-and-white circles.

There was no expectation for Westerners to wear hijabs and veils, and my non-Muslim female classmates wore Western clothes. But I wanted to immerse myself and tried wearing a niqab. At first it felt awkward to breathe and my glasses fogged up, but I adjusted.

Yet I quickly discovered a curious delight in seeing the world from this angle. I am a large woman – a fat chick – and I come from a culture that worships the slim, exposed female body. At last I could relax because I felt I was not on display. But while wearing veils was unproblematical in Yemen, I knew that back in Australia it would be different because the niqab is often viewed as foreign or oppressive. Putting on the niqab takes a strong personality.

I am also an academic in Melbourne. I study Muslim experiences of life in Australia, and during my research I found that, based on a survey of Muslims living in NSW and Victoria, only 3.7 per cent of the 328 women surveyed said they wore the niqab in public. That’s only 12 women. And while it’s impossible to generalise from such a small sample, these 12 women seemed roughly comparable with the broader Muslim community: a wide age range, a spread of ancestries including Australian-born, sociable, sporty.

So who are they? Statistics are one thing, actually talking to women who veil is another. That’s why I am in Umm Yusuf’s living room. Raised in Melbourne as a Catholic, with Irish and Scottish ancestry, her path to Islam came through a woman she knew who had converted. After a few months of wearing the hijab, Umm Yusuf told a fellow Muslim woman that she thought the niqab was beautiful and would like to wear it.

She was told, ”No, no, you don’t have to do that,” but she perservered and learnt about it through reading as part of her own search for the best way to follow Islam. Now she loves the privacy and anonymity it provides. ”There’s a freedom in it,” she says.

Her husband is supportive, as is her non-Muslim family, although she thinks they’d prefer if she didn’t wear it. I ask her if she ever has trouble recognising other women wearing niqabs, or communicating with them. Her children giggle as though I am asking if the moon is made of green cheese. ”No,” she laughs.

Fatima Shah, of Pakistani heritage but born in Brazil, the daughter of a Doncaster imam, has a similarly modern view of the niqab. She started veiling at 19, nine years ago. As I knock on her door, a car swings into the driveway. She’s running late but welcomes me in, peeling off the headscarf and niqab.

Shah, who came to Australia aged five, started to think about wearing the niqab while at university. She wasn’t married at the time and no one else in her immediate family wore it. She’d read about other niqab-wearing women on internet forums.

”I thought about it a little bit and then one day I just decided to put it on,” she says. She struggles to explain why a woman might choose to do something others find so strange. ”My religion is the central part of my life, so it affects everything I do. What I eat, how I dress, where I go.”

To her, wearing the niqab is not compulsory but it ”is something good I can do in my life”.

However, Umm Aisha, the next woman I interview, takes a different approach. Born in Melbourne but of Hadrami ancestry from Yemen, she firmly believes the niqab is compulsory in times ”of evil and corruption” when women are not respected. Umm Aisha follows a different interpretation of Islam that emphasises segregation and gender differences much more than others.

Her approach places emphasis on what she sees as natural differences in gender roles. She avoids socialising with unrelated men and believes they should not hear her voice unnecessarily. Yet she lives a bustling life in suburban Fawkner, her home is a hive of activity, with children coming and going, phones ringing and neighbours knocking on the door.

Umm Aisha put on the niqab after marriage, but her family, including her husband, an Anglo-Australian who has converted to Islam, were strongly opposed to her decision. Hers is an assertive stance. ”My husband didn’t like my niqab initially. All of a sudden our social life had to stop and I didn’t consult with him first,” she says. ”It was a lifestyle change, and he had to be ready for that lifestyle change too.”

She took it off, but warned him that she was trying to get closer to Allah and he was making it harder for her. A few months later he told her he was ready.

Aziza Abdel-Halim, president of the Muslim Women’s National Network of Australia, says face-veiling is a cultural practice not mandated by the religion.

”There’s no mention of a face-cover in the Koran,” she says. Others interpret it differently, but Abdel-Halim feels the argument made by some religious leaders – that face-veiling as practised by the prophet’s wives should be done by all Muslim women – is not appropriate in the modern era. ”What went well in the 17th century is not really going to work that well in the 21st century,” she says.

She thinks modern society needs people to be identifiable. Hers is a contextual interpretation of Islam, taking into account current social conditions. Others look to the long-established traditional interpretations that have served Muslims well for 1400 years.

Nejla Selbibeg, a Turkish Cypriot living in Broadmeadows, strongly feels that Australia offers Muslim women freedom to choose. She doesn’t always wear the niqab, and feels that Muslims here should mix with non-Muslims.

Asiya Davidson-Allouche agrees. A self-described feminist Muslim who lives in the northern Melbourne suburb of Dallas, she believes women should be free to choose how they understand and practise their faith.

”One of my earliest memories is looking at The Female Eunuch on my mother’s bookshelf and wondering why on earth the cover was so ugly,” she says. ”So I’ve always been taught to question society’s expectation for women and women’s roles. I’ve brought all of that to my understanding of Islam.”

Davidson-Allouche says clothing has a ”porous” quality. ”It sucks in meaning in the same way language does. And one of the problems we have is that people think there is only a single meaning.”

She says she gets frustrated by Muslims who don’t understand that even within the Muslim faith there are a wide range of views on how best to be a Muslim.

”I do get annoyed when some people, particularly Muslims, say it’s not obligatory [to veil]. Because it’s fine to have the opinion it’s not, but you have to respect the position that there are scholars in history who have said it is obligatory.”

She also takes issue with the way the niqab’s function and meaning can change depending on whether it is worn in Australia or overseas.

What she does love, however, is the rich symbolism of veiling, comparing it to how God is described as being hidden by veils that He lifts for those that would seek reunion with Him.

”There are layers and layers of veils between us and Allah, which is the true reality,” she says. ”To be hidden, to be concealed, is something really beautiful. It enables us to always be reminded of that link.”