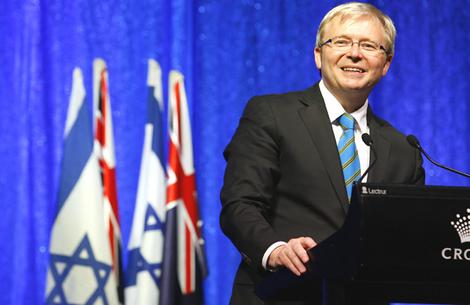 It waits to be seen how Australian Prime Minister Kevin Rudd will respond to the claim that Australian-Israeli soldiers were involved in the illegal attack on the Gaza peace flotilla. Seeing that the attack has been  widely recognized as being illegal under International law, the involvement of Australian citizens, even if they are dual Australian citizens, would be of great concern.

The revelations have been made by Kate Geraghty, a photographer working on assignment to cover the Gaza peace flotilla for The Sydney Morning Herald.

Geraghty speaking to the Herald last night while awaiting deportation from Israel, said the Israeli attack was ”pretty full on”. She also exposed the participation of the Australian-Israelis in the attack.

”Three of the soldiers on the deck were Australian-Israelis, I couldn’t believe it.” Geraghty said.

She said she had been ”Tasered” by the Israelis. ”It hurt and it made me feel sick.”

Israel has now started to deport some of those it had been detaining, although many are still yet to released.

ISRAEL is believed to have deported 618 international detainees, including four Australians, captured when it stormed a flotilla of ships in international waters.

The detainees, who had been held in a detention centre in Beersheva, were to be put on Turkish military flights to Istanbul last night, according to an Irish consular official. The Australians were given no consular access.

The deportees include the Herald’s chief correspondent, Paul McGeough, who is travelling on his Irish passport, and the Herald photographer Kate Geraghty.

The United Nations Human Rights Council adopted a resolution setting up an independent inquiry. The resolution, which condemned Israel’s ”outrageous attack”, was adopted after 32 countries voted in favour, three against and eight abstained.

An Australian, Ahmed Luqman, 20, who was shot in the leg during the assault, was still being held in an Israeli hospital but his wife, Jerry Campbell, and sister, Maryam Luqman, were among the deportees.

Israel triggered international outrage when it raided a convoy of activists and aid workers trying to break the blockade on the Gaza Strip, killing nine people. It says its commandos were attacked by the protesters.

The Prime Minister, Kevin Rudd, told Parliament he had spoken to Mr Netanyahu and requested ”he personally engage on the matter concerning the well-being of these Australians”. Mr Rudd said he had indicated his government ”remains sensitive to the security concerns of Israel”, but was deeply concerned by the loss of life.

Geraghty told consular officials she was on the Challenger One when it was intercepted. She suffered bruises, minor burns and nausea.

Challenger One’s first mate, Shane Dillon, saw Geraghty being attacked and Israeli forces ripping equipment from McGeough. ”She was just doing her journalistic duties … She advised them she was a bona fide photographer … She was just attacked,” Mr Dillon told the Herald from Dublin.

He said Challenger One had attempted to outrun the Israeli boats to give Geraghty a chance to send her images. ”We were 15 minutes from the flotilla before they could board us,” he said.

Geraghty was questioned by the Israelis and asked if she knew she had entered a combat zone. Geraghty said she was an accredited journalist and those rules should not apply. A letter sent on May 24 by the Herald’s editor, Peter Fray, to Israeli authorities called for both journalists to be given safe passage if captured.

”In the event that Israel apprehends the vessel on which they are travelling, I urge you to allow McGeough and Geraghty the freedom to pursue their journalistic duty …”

The Israeli ambassador, Yuval Rotem, confirmed the letter was received before the flotilla sailed.

Gabi Lusky, a lawyer hired by the Herald, said authorities lied to her. ”I specifically asked to see the Australians and was told I would see them.” She said she was locked in a room and later found McGeough and Geraghty were on the way to the airport.

The Israeli High Court of Justice said it would hear a petition to prevent the deportation two hours before the planes were due to leave.

“There was what the Israeli Defence Force called all these hostile weapons on board but we didn’t witness any of that,” Mr Dillon said.

“They quickly overcame people on the stern of the vessel and got on board.”